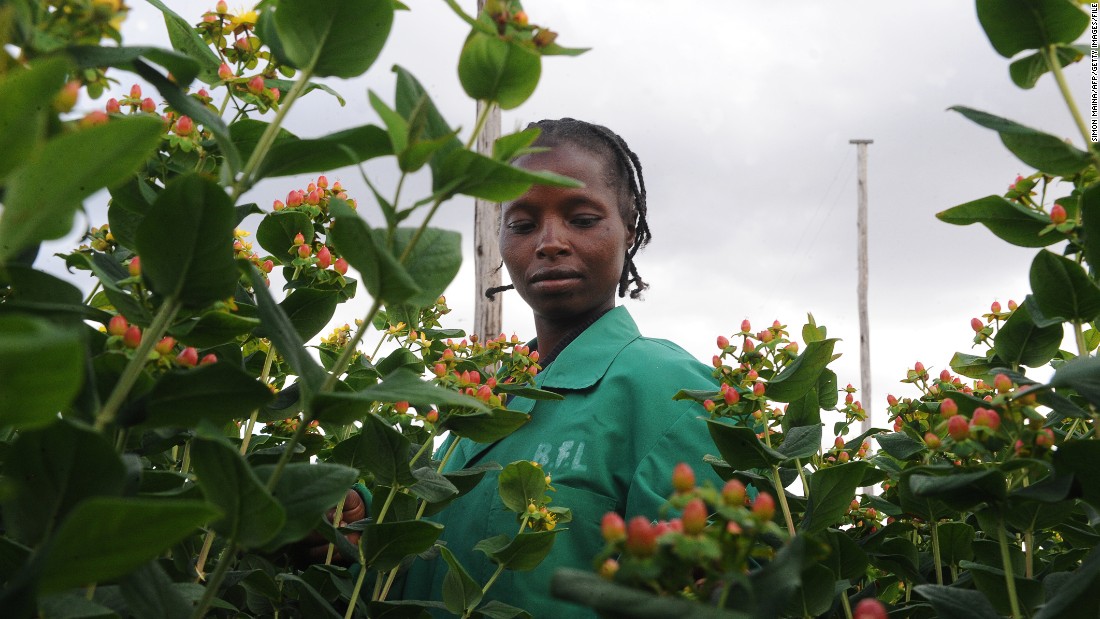 Naivasha, Kenya – Joyce Iminza steps down from an old, white bus and boards a motorcycle taxi in Naivasha, a flower-rich town about 100km northwest of Kenya’s capital, Nairobi.

“Take me to my house. My kids are on their way home from school and I need to prepare dinner for them,” she tells the driver as she climbs up to sit behind him.

In six minutes, she arrives at her one-bedroom rented house and starts cooking.

The 36-year-old has been working in Naivasha flower farms for 12 years. Despite the years of hard work, she struggles to sustain her family.

“I am a single mother. My employer pays me $100 every month. This is never enough for me to pay my house rent, buy food, and pay school fees. I end up taking loans every other time,” says Iminza.

She is not alone.

According to the Kenya Flower Council, an association that represents cut-flowerproducers, Iminza is among more than 90,000 floriculture workers employed by over300 exporters from Kenya.

Because of its favourable weather all year round, Kenya is Africa’s top flower exporter with an average of 360 tonnes exported daily.

It is the world’s fourth largest producer of cut flowers after the Netherlands, Colombia and Ecuador.

In 2017, according to Horticultural Crop Directorate (HCD), a public corporation, the floral industry earned Kenya $823m, with Europe a major market.

With demand for flowers skyrocketing on occasions such as Valentine’s Day, the sector is a top foreign-exchange earner.

Iminza says the government, which is responsible for regulation, ignores the interests of flower farm workers.

“The Kenyan labour laws do not favour us as workers at all. Our employers take advantage of these policies and go ahead to pay us whatever is stipulated. Because of this, our lives literally remain at the same level no matter the number of years worked,” she says.

The minimum wage for an unskilled agricultural employee is about $65 a month.

“The government thinks that the investors are doing us a favour because they come and employ masses of people, while, in essence, these people are taking advantage of cheap labour as a result of our government’s investor-friendly labour policies.”

Juma, now 52 and a father of seven, worked for 13 years cutting flowers before joining KPAWU.

“When I was a cut-flower worker, my colleagues and I never knew how successful this industry was,” he says. “[We want to] make sure workers are informed.”

Through the union, Juma has previously managed to negotiate better working conditions on behalf of over 30,000 flower farm employees in Naivasha.

But the main challenge is, he says, that many people take up these jobs because they are unemployed and desperate.

One example is 50-year-old Leonard Karani, who has six children.

“I quit education when I was in high school due to insufficient tuition fees,” he says. “I struggled to find a permanent job before landing this one.”

Karani has worked for 18 years for several flower companies.

His monthly salary is $110 – not enough to feed his family.

“Our lives are defined by debt,” says Karani. That is the only way I can sustain my family. If I had other skills, at least I would search for other jobs. I have no options.”

Cyprian Onyony, a lawyer, says most labour law and policies were enacted during colonial times.

While a significant amount of legislation was repealed in subsequent years, the employment law that deals with wage regulation has not been reviewed in a long time, he says.

“This problem can primarily be solved by the Kenyan parliament through the passing of minimum wage bills that can be revised within a stipulated time period. As the business booms, unskilled floriculture workers are able to feel success. The high returns should also trickle to better terms for the employees,” Onyany explains.

Back in Naivasha, Iminza, the single mother who works for $100 a month, finishes preparing her children’s dinner.

“I have lived a life of debt – year in, year out. I have to take care of these kids all alone. I just pray that things change in the future,” she says. “That’s all I can do.”

Egypt and S. Sudan to boost cooperation on water issues