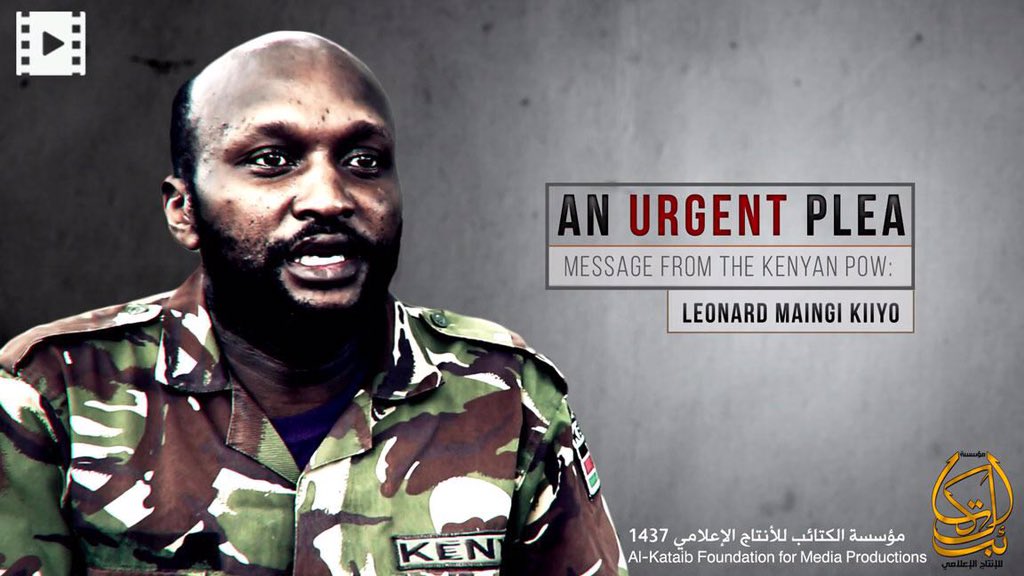 Al Shabaab militants have released a video of a man allegedly captured in the El Adde attack asking the President to withdraw troops from Somalia and negotiate release.
The eight-minute video released on Thursday features a 40-year old Leonard Maingi, who identifies himself as a KDF soldier and is in the full Kenyan military uniform.
Maingi, who says he hails from Makueni county, gives details of how the terror group overran an Amisom camp on January 15, killing a number the state is yet to confirm.
“My message is to you, President Uhuru Muigai Kenyatta . As commander-in-chief of the Kenyan Defence Forces, we follow your orders,” he says.
“As soldiers, we obeyed your instructions and crossed into Somalia. We then went ahead to El Adde where we were attacked on January 15. We tried fighting but we were defeated and weapons seized.”

The video does not show other prisoners of war but Maingi mentions colleagues who are also in captivity.
Reports indicated at least 12 soldiers were captured alive and others with injuries, and that the terrorists used some as human shields while Kenyan security agencies pursued them.

“Mr President, this may be the last chance to plead with you as my commander that I swore to serve and one that I love. Please, I am begging you Mr President,” Maingi says in the background of what appears to be a thicket.
He does not look frail but bears a thick beard.Maingi goes on to say that he joined KDF in 1997 and was attached to the 9th Battalion at Moi Barracks in Eldoret.
He says he was a doctor in the nursing section of the battalion and that he joined the African Union peace-keeping force on January 1, two weeks before the militants attacked the base in Southern Somalia.
The captive further sends messages to family members and political leaders.

“I want to tell them (family) that I love them, I pray for them and I wish for the to pray for them. My only hope as a prisoner is them,” he says.
Since the attack almost eight months ago, little is known about the incident termed as the most brutal assault on Kenyan soldiers despite, the government’s promise of a probe.
Al Shabaab has been thriving on propaganda around the attack, in an effort to remain relevant in an increasingly shrinking space, following the onslaught by Amisom and Somali national forces.
Shortly after the ambush, the terror group posted a video online claiming the militants were targeting major centres including State House.

In it, a heavily-bearded man seated on the ground tells a group dressed in hooded clothing that they will march on State House and force Kenya to “change their flag by erasing all the colours – except the red one”.

Ahmed Iman, a JKUAT-trained engineer from Majengo, and on whose head there is a Sh300 million bounty, said al Shabaab “will spill blood in Kenya”