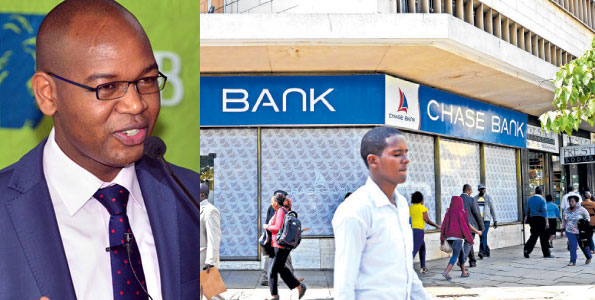 All Chase Bank branches will open by April 27 and online and mobile-banking services will become available, the Nairobi-based central bank said in an e-mailed statement Wednesday. The East African nation’s 11th-largest lender was taken over by regulators on April 7, a day after its chairman and group managing director resigned as the company issued restated results that received a qualified opinion from auditors. The police subsequently ordered their arrest.

An acquisition of Chase Bank will help bolster KCB’s access to small- and medium-sized businesses and middle- to upper-income earners in Kenya, according to Francis Mwangi, head of research at Nairobi-based Standard Investment Bank. Chase Bank, which has more than 40 branches and 100,000 customers, also offers Islamic banking services and owns an insurer and microloans unit. KCB will study Chase Bank’s books through a due diligence review, which will inform its decision on buying the majority stake, the central bank said.

“The price they pay for it significantly determines the benefit they derive from it,” Mwangi said. “They know they are in a better bargaining position” because of the situation Chase Bank is in, he said.

Shares of KCB rose 1.2 percent to 43 shillings by 12 p.m. in Nairobi, the highest on a closing basis since Jan. 5. That pared losses this year to 2.9 percent.

Kenyan regulators had received offers from six local and two foreign banks for Chase Bank, Central Bank Bank Governor Patrick Njoroge told reporters in Nairobi on Wednesday. The reopening of the bank will help restore confidence in the industry that has been shaken following the collapse of Imperial Bank Ltd., which was seized by regulators in October, and the failure of Dubai Bank Kenya Ltd. in August.

The $61 billion economy is over-banked, with 42 banks serving more than 40 million people, compared with 22 banks in Nigeria, which has a population of 180 million and gross domestic product that is nine times bigger, according to Cytonn Investments Management Ltd., a Nairobi-based money manager. Kenyan regulators should consider forcing banks to consolidate to strengthen the industry, NIC Bank Ltd. Group Managing Director John Gachora said in an interview in Nairobi on Tuesday.

“It is a good move first for Chase bank clients,” said Maurice Oduor, Investments Manager at Cytonn. “It is also a good move for KCB Group, as they get Chase bank’s niche clients. The question remains whether it will be re-opened successfully. Clients might go away unless KCB ups its game in terms of client service.”

KCB’s credentials as a strong bank with a solid brand, adequate human resources, and wide experience in the country, will facilitate safeguarding the interests of CBL’s depositors and creditors, as well as the wider public interest, the central bank said. A moratorium on payments to creditors of Chase Bank will remain in place until details have been finalized on how these could be dealt with, it said.

“Additional information about this process, including the timeline of an acquisition and the exit from receivership, will be made available in due course,” the central bank said.

KCB Group CEO Joshua Oigara declined to comment on the purchase when contacted on Wednesday. The lender was exposed to Chase Bank to the amount of 1 billion shillings ($9.9 million) , which Chief Financial Officer Lawrence Kimanthi said on April 13 was “off balance sheet exposure.”