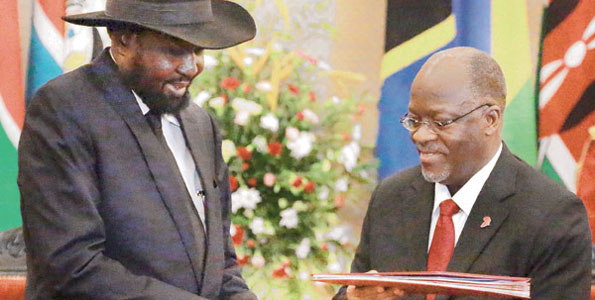 NAIROBI (HAN) April 23, 2016. Public Diplomacy & Regional Security News. By CHRISTABEL LIGAMI. After signing the East African Community Treaty on Accession on April 15, South Sudan now has three years to implement the Treaty in order to become a full member of the economic bloc.

According to a report on ‘South Sudan’s Accession to the EAC,’ Juba has to align its laws and policies on monetary issues, free movement of labour, capital and people with those of the EAC before becoming a full member. This will be done progressively to allow South Sudan to build the relevant capacity and strengthen its institutions.

The South Sudanese lawmakers will be tasked with harmonising the relevant laws and policies with those of the EAC and ensuring enforcement.

“This calls for a public awareness campaign by the government to build political consensus,” reads the report.

South Sudan signed the EAC Treaty on April 15 following approval of its application to join the community by the EAC Heads of State Summit in Tanzania earlier this year. South Sudan becomes the sixth member of the economic bloc, joining Kenya, Uganda, Tanzania, Rwanda and Burundi.

Within the three years after accession, Juba must prepare for implementation of the Common Market Protocol, including implementing the Common External Tariff and other key provisions of the Protocol such as the freedom of movement of capital, services, goods, persons and labour.

At present, South Sudan does not have to open its labour or services market fully, but only to select professions and services — those beneficial to the South Sudanese and the economy — such as doctors and teachers.

“This will be critical as South Sudan requires support in the establishment of better health and education services for the benefit of its citizens,” reads the report.

“After the three years, South Sudan will still be allowed to request additional time in line with EAC laws if it finds itself unable to comply with certain requirements,” the report adds.

The EAC Common Market Protocol provides for the free movement of goods, labour, services and capital, which will significantly boost trade and investments and make the region more productive and prosperous.