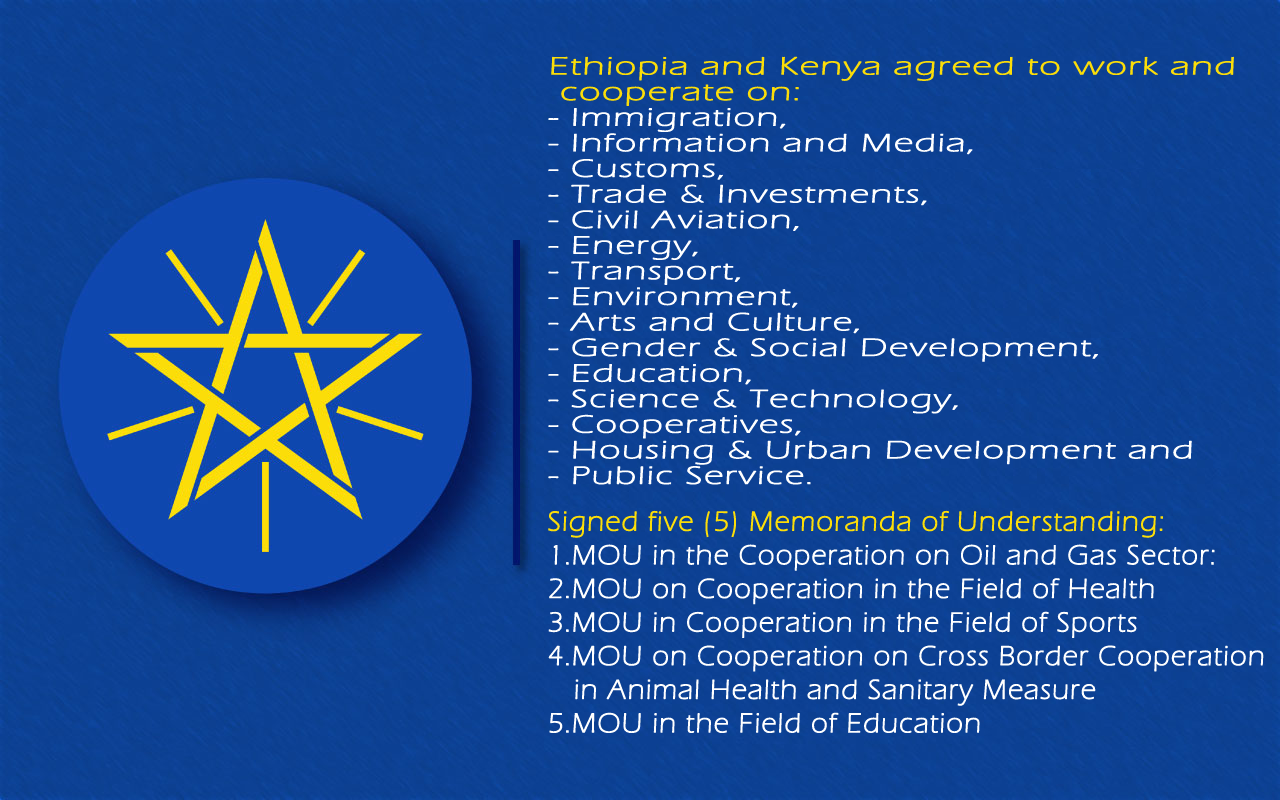 At the bilateral level, the two Leaders welcomed the decision to elevate the economic relations between the two nations through signing the Historic Special Status Agreement.  They committed to redouble their efforts and undertook to provide their support for the creation of a conducive environment for trade and investment between the two countries.

The two leaders noted the progress on the implementation of the commitments made by the 34th Session of the Joint Ministerial Cooperation Commission meeting between Kenya and Ethiopia held on 21st November, 2012 and the 35th Session held from 17th -22ndJune, 2016 in Nairobi as follows:

Affirmed their commitments to support the African Position during the upcoming two major conferences scheduled to be held in Nairobi namely the 14th United Nations Conference on Trade and Development (UNCTAD) and Tokyo Conference on Africa’s Development VI (TICAD) Summit in 17th to 22nd July and 27th  to 28th August, 2016 respectively.

Appreciated the work of the Joint Border Administrators’ Commissioners Meeting for its contribution in enhancing issues of Peace and Security along the common border and agreed to share information on the movement of anti-peace elements, human and drug trafficking and illegal arms dealers and committed to share experiences in the management of possession, registration and licensing of firearms.

Noted the ongoing construction of the Moyale One Stop Border Post (OSBP) and agreed to expedite the process including its operationalization.

Agreed on the establishment of a Joint Railway Commission (JRC), and Project Coordination Committee (PCC) to help in the implementation of the bilateral agreement signed in March 2012 in Nairobi, Kenya.

Committed to finalize an agreement on the development and operation of a product oil pipeline from Lamu Port to Addis Ababa by the end of 2016.

Agreed to explore the possibilities of launching a Joint Grand Kenya/Ethiopia Marathon as a “Sports Brand” to promote Cultural Cooperation and Sports Tourism.

Stressed the key role that African countries must continue to play in the pursuit of peace and security on the African continent. While noting the gains made in South Sudan and Somalia, underlined their commitment to support the stability and peace building of these two nations in collaboration with IGAD and the international community.

Witnessed the signing of five (5) Memoranda of Understanding:

H.E. Hailemariam Dessalegn expressed warm appreciation to H. E. President Uhuru Kenyatta, the people and the Government of Kenya for the warm welcome and generous hospitality extended to his delegation during the visit.

H.E. Hailemariam Dessalegn, invited H.E. President Uhuru Kenyatta to make a State Visit to Ethiopia in the context of the Second High Level Biennial Commission in the first half of 2018.

The two leaders rededicated themselves and their Governments to enhance and further deepen the cordial bilateral relations that exist between Kenya and Ethiopia and directed the immediate implementation of all signed agreements and MOUs within a clear time frame.