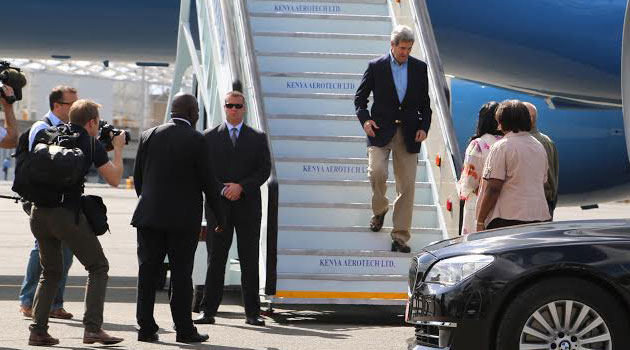 Kerry arrived in the Kenyan capital late on Sunday – after a two-week summer break – for his second trip as secretary of state to Nairobi since May 2015.

On Tuesday, he travels to Sokoto, Nigeria, the historic Muslim city in the remote northwest, followed by talks with Nigerian President Muhammadu Buhari in Abuja.

“We will … talk about how we move forward in trying to implement peace in this country,” a senior State Department official said of South Sudan.

“The people of South Sudan have suffered for far too long, and the continued instability there has led almost a million refugees and a humanitarian crisis that is far beyond the abilities of even the international community to respond to,” the official told a conference call.

The international community has poured billions of aid into supporting the world’s youngest nation, which gained independence in 2011. Oil production, by far the biggest source of government revenue, has plummeted.

But worsening violence has raised fears of a return to civil war that erupted in late 2013, which broadly ran along ethnic lines, pitting President Salva Kiir, an ethnic Dinka, against his rival and vice president Riek Machar, a Nuer.

Violence flared when Machar withdrew his forces from the capital Juba in July and was sacked by Kiir as vice president.

Machar was picked up by U.N. peacekeepers in the neighboring Democratic Republic of Congo a week ago with a leg injury and was handed over to authorities in Congo.

Machar led a two-year rebellion against forces loyal to rival Kiir before the two sides reached a peace deal in August 2015. Under the deal, Machar returned to Juba in April to resume his role as vice president.

On Monday, Kerry will meet Kenyan President Uhuru Kenyatta before joining foreign ministers from Kenya, Uganda, South Sudan, Sudan, Djibouti, Tanzania, Somalia and Ethiopia to discuss South Sudan and Somalia, where there are concerns that delays in the approval of new election rules could dampen its recovery from conflict.

World powers and regional states have struggled to find leverage over the warring factions in South Sudan, despite U.S. and European sanctions on some military leaders and African threats of punitive actions.

Especially of concern to Washington was an attack on a Juba hotel in July by uniformed men who killed a U.S.-funded journalist and raped civilians, including aid workers.

The U.N. has launched an investigation into accusations U.N. peacekeepers in Juba failed to respond properly to the attack.

Opposition protests in Nairobi since April have stoked fears among church leaders and Western diplomats of a repeat of the violence following the 2007 election in which 1,200 people were killed.

In a letter to Kerry before his visit, the Human Rights Watch group urged him to discuss rights concerns with Kenyatta. The group said it had documented 34 cases of extrajudicial killings and another 11 deaths of people last seen in state custody over alleged links with al-Shabaab militants in Nairobi and in the northeast. (Reporting by Lesley Wroughton; Editing by Sandra Maler)