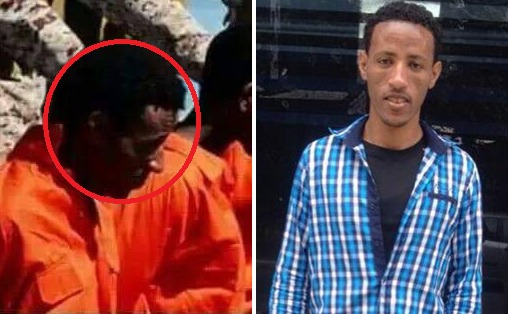 London (HAN) April 23, 2015 – Public Diplomacy, Regional defense and Security News An Eritrean refugee currently detained in Israel has described the moment that he realised one of the 30 migrants executed on a Libyan beach was his friend of more than seven years.

Aman Beyene, 38, watched with horror as his close friend was forced to kneel in the sand and killed by Islamist militants in a brutal murder that was filmed and released on the internet.

The man was 30-year-old Tesfay Kidane, who last year was paid $3,500 by Israel to return to Africa under the country’s controversial voluntary return policy.

In the latest propanganda video released by the Libyan arm of the radical Islamist group, militants are shown leading a group of men along a picturesque shoreline as the waves lap at their feet.

As the men kneel in the surf, a narrator accuses them of being members of the “hostile” Ethiopian church as the camera actually pans over Kidane’s face. The video cuts to the bodies of 15 men beheaded on the beach and a similar number shown shot dead in scrubland.

An Israeli NGO, the Hotline for Refugees and Migrants, revealed this week that at least three of the “Ethiopians” were actually Eritreans, who were formely refugees in Israel before being paid to leave the country and return to Africa. One of those was Tesfay Kidane.

Israel has upped pressure on refugees over the past two years, first by detaining hundreds of Sudanese and Eritreans in a desert prison complex in the Negev desert and then offering them cash to return to a third country, usually Rwanda or Uganda, where they are often deported back to Sudan or Eritrea.

“‘I had known Tesfay since he arrived in Israel seven years ago, he arrived one month after me.’”
– Aman Beyene

Over 42,000 refugees currently live in Israel, most of them in poor areas of Tel Aviv where they are only permitted to work low wage jobs and are frequently exploited by landlords. Israel refers to the refugees as “infiltrators” and has only approved a handful of asylum requests in recent years.

Earlier this year, tens of thousands of asylum seekersmarched in Israel demanding more rights and an end to the jailing of refugees. Last year, refugees marched to the Egyptian border as part of a protest against conditions in Holot. There have also been a number of racist attacks on African refugees inside Israel.

An Israeli government spokesperson in London declined to comment on Kidane’s case.

Beyene described a hardworking and well-liked young man who had fled Eritrea after being arrested for leaving his army barracks to attend a family wedding.

“I had known Tesfay since he arrived in Israel seven years ago, he arrived one month after me. We were friends,” said Beyene.

Like all Eritreans, Tesfay had been drafted into the army as a teenager and had fallen foul of the authorities when he left his barracks to attend his brother’s wedding. The military found him and arrested him, and after a month and jail he decided to leave Eritrea for Israel.

He first crossed the border into Ethiopia, followed by Sudan. He then went to Egypt and arranged with people smugglers to cross the Sinai into Israel. Picked up by the military in Israel, he was first detained and then released to melt into the sizeable Eritrean community in south Tel Aviv.

But as the numbers of refugees arriving in Israel increased the authorities began to crack down, opening Holot ‘open prison’ in December 2013 where hundreds of refugees are currently held. Holot is in the middle of the desert and 70km from the nearest city, and refugees are required to check in at both morning and evening, meaning it is practically impossible for them to leave.

Those who flaunt the rules are often taken to nearby Saharonim, a maximum security prison that is home to a number of Palestinian prisoners and towers over the Holot facility.

“He had left Holot to visit his family in Tel Aviv and had not returned on time, as a result he was put in Saharonim Prison. The next I heard he had decided to leave,” said Beyene.

Like as many as 7,000 Eritreans and Sudanese refugees in Israel, Tesfay had taken the $3,500 from the authorities and returned to either Rwanda or Uganda, where he used the money in an effort to reach Europe. Beyene said that despite several attempts, he could not contact his friend, but has heard from others of his ultimately unsuccessful efforts after arriving in Africa.

“He went to Rwanda or Uganda and from there to Sudan, then to Egypt and Libya. He had wanted to reach Europe,” he said.

Like dozens of others, Tesfay was captured by IS in Libya and later murdered on the beach as part of group that were thought to be Ethiopian Christians. A witness told IBTimes in Sicily this week that the men were part of a huge group of African migrants that were held for weeks by Libyan militants.

In Holot, Beyene said that the shocking video was still alarming refugees who feared that if they were eventually sent back from Israel they would find themselves either being deported to Sudan or Eritrea or being forced to brave the route north that ended in such a brutal death for his friend.

“There will be more deaths. I think that of these hundreds drowning in the Mediterranean, many will have come from Israel,” he said. IBTimes