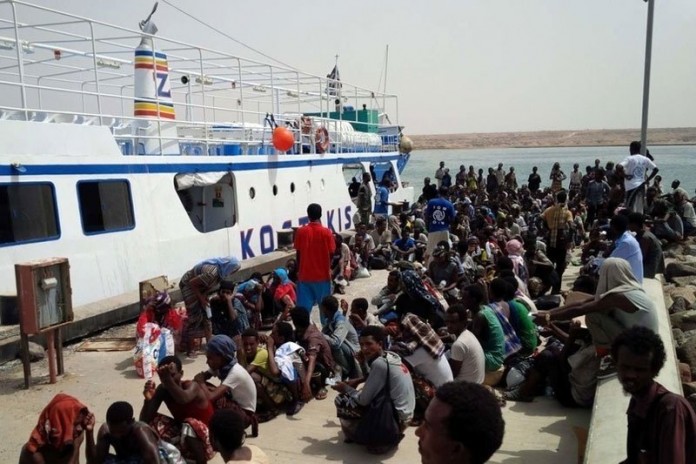 The voluntary repatriations, in close cooperation with the governments of Yemen, Djibouti, Ethiopia and Saudi Arabia, as well as IOM missions in the region, followed IOM’s earlier repatriation of 4,222 Ethiopians from Yemen in an operation that was suspended in September 2015 due to lack of funding. The same operation provided post-arrival assistance to another 3,319 Ethiopians fleeing Yemen.
The new repatriation operation from Yemen’s Hodeidah seaport to Djibouti and on to Ethiopia by bus aims to evacuate a total of 1,212 stranded migrants using IOM emergency funding. IOM’s migrant assistance and protection operations in Yemen are also supported by DFID, ECHO, the US State Department, Sida, UN CERF and USAIM.

The stories told by the migrants testify to the urgency of the evacuation and the desperate situation of many migrants in Yemen. Ahmed* (name changed*), a 22-year old barber, explained that he left Ethiopia in search of a better standard of living in Saudi Arabia.

“After paying smugglers to take us to Yemen, and we were promised that we would be on our way to Saudi Arabia to make a lot of money. But we were intercepted by kidnappers as soon as we got off the boat in Yemen,” he said. “We saw two individuals beaten to death. They were hung upside down and beaten to death; we watched them die.”

Ali* (*name changed), a 25-year-old khat shop owner, told IOM how he was also kidnapped and held to ransom. Family members in Saudi Arabia had to pay the kidnappers a total of 10,000 Saudi Riyals (USD 2,700) for his release. He considers himself fortunate, given the cruelty he witnessed.

“We saw the kidnappers carving out the eyes of men with a knife. They melted plastic on the backs of some of them. We saw one young man who was beaten so badly his arm and chest bones were broken. He was thrown out into the street to be eaten by dogs. If you don’t have the money to pay the ransom demanded you die. We also saw many women who were raped,” he said.

The migrants who either managed to escape or were released by kidnappers following ransom payments were given refuge in IOM Yemen shelters. But they represent a very small percentage of the migrants in need of repatriation, according to Fumiko Nagano, IOM’s Migration Management Programme Coordinator in Ethiopia.

“According to UNHCR and the Regional Mixed Migration Secretariat, over 92,000 migrants arrived in Yemen in 2015. Some 89% of those are believed to be Ethiopian nationals,” she says.

Director-General of the Middle East Affairs Directorate at the Ethiopian Ministry of Foreign Affairs Siraj Reshid says that the latest returns of migrants from Yemen further underline the need to strengthen the fight against human traffickers and migrant smugglers.

“The Government of Ethiopia has already ratified an umbrella law and we are working on its implementation to promote regular channels for those who seek job opportunities abroad,” he said.