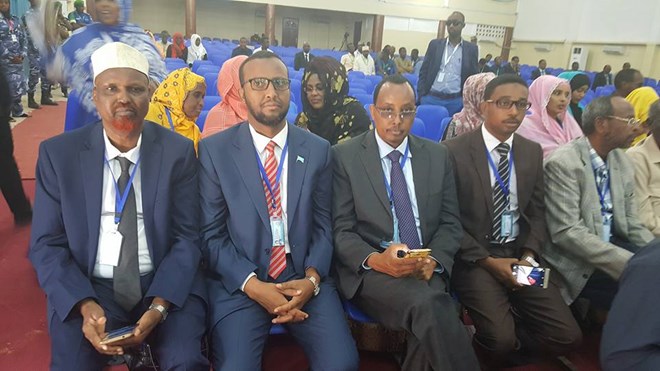 The United Nations, African Union, European Union, Inter-Governmental Authority on Development, Belgium, Italy, the Netherlands, Sweden, the United Kingdom and the United States are gravely concerned over a number of decisions announced by the National Leadership Forum (NLF) in its communiqué dated 24 December 2016.

Today’s inauguration of the Federal Parliament represents a step forward in the electoral process. However, international partners wish to see the electoral process go forward with the existing 54 seats in the Upper House as stipulated under Somalia’s Provisional Constitution. Any further expansion of the Upper House should only be contemplated after the presidential vote has been held in the new federal parliament and implemented through a proper constitutional process.

International partners acknowledge the NLF’s communiqué of 26 December 2016 that designates five seats in the House of the People for undergoing a fresh round of voting. But this fails to address a number of other egregious cases of abuse of the electoral process, including seats reserved for women candidates only that were ultimately taken by male candidates.

The NLF’s decision to revoke all disqualifications of candidates made by the country’s electoral bodies for allegedly committing abuses and malpractices represents a blanket amnesty for some of the most blatant irregularities witnessed during this electoral process. It also contravenes the Federal Government’s solemn commitment to respect the rule of law.

If these candidates are allowed to take their seats in Somalia’s tenth parliament, it will bring into question the NLF’s expressed commitment to the principles of accountability and credibility that underpin the entire process. It will also undermine the electoral code of conduct signed by all parliamentary candidates in the spirit of leveling the playing field and ensuring the delivery of a credible process.

International partners strongly believe that elections must be re-run for seats where the voting outcomes were clearly distorted by violence, corruption, intimidation, the unauthorized substitution of electoral college delegates and a failure to set aside one of every three seats for exclusively female candidates.

International partners call on the federal parliament to issue as soon as possible a timeline for the completion of the process in order to elect the Speakers and Deputy Speakers of the new federal parliament and the Federal President. This timeline should be strictly enforced to avoid yet another postponement in an electoral process that was supposed to have finished earlier this year. There is a particular need to conclude the process swiftly in light of the UN Security Council’s upcoming meeting on Somalia that is scheduled for 19 January 2017.

International partners believe that the integrity of the 2016 electoral process hangs in the balance. More delays and a failure to hold accountable those parties who have committed serious abuses and malpractices will compromise the international community’s ability and willingness to engage with Somalia’s next federal government.