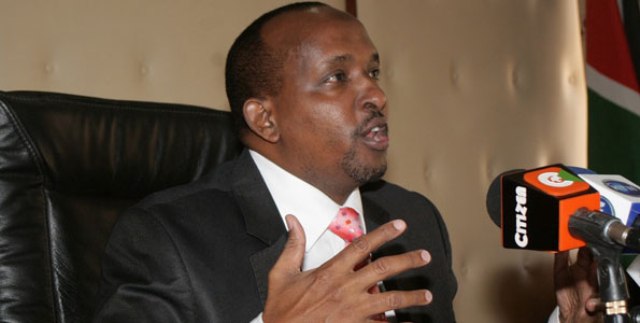 Nairobi (HAN) April 20, 2014 – The failure of Somalia has had a significant impact upon its neighbors, Kenya, Ethiopia, Djibouti and Yemen.

Kenyan Somali MP Duale said  “I will not allow my people to be blacklisted as a Muslim terrorists.,”  Because of this political statement, Kenyan TNA MPs accused leader of Majority Aden Duale of being a 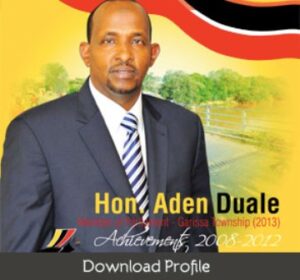 Kenyan United Republican Party (URP) Members of Parliament have come out of their long silence to rallied to defend National Assembly Majority Leader Aden Duale. They are strongly defending Duals position against accusation that he has been too critical of the Government’s security clampdown to contain the terror threat. Four MPs, speaking at different forums, asked The National Alliance (TNA), their coalition partners in Jubilee, to respect Duale’s position as the Garissa Town MP and said the Majority Leader was within his rights to voice the concerns of his constituents.

The Kenyan leftist MPs took issue with statements suggesting that Duale was sympathetic to groups allied to Al-Shabaab after he spoke out against security operation in Eastleigh, the home Somali business community in  Nairobi, Kenya.

The Kenyan Kigumo, Jamleck Kamau of TNA had asked that Duale be replaced as Majority House Leader for his vocal criticism of  Security Operation Usalama Watch. However, National Assembly Deputy Speaker and Sotik MP Joyce Laboso called for caution and said the issue had been politicised. “MPs should have used the in-house mechanisms to reprimand Duale if that was warranted. Let us not politicise the fight against terror for political capital,” said Laboso.

National Assembly Majority Leader Aden Bare Duale has been a vocal spokesman of the Jubilee Government, supporting its agenda and programmes zealously. However, his recent criticism of the current security operation in the war against terror appear to have put him at odds with the political establishment he secured. The Standard On Sunday’s Senior Political Writer, OSCAR OBONYO poses the hard questions to the Leader of Majority, on his apparent disagreement with his bosses, his possible political isolation, including his alleged inciting sentiments encouraging terrorists to hurl bombs elsewhere in the country except Nairobi’s Eastleigh.

The Kenyan Standard: For the first time you are speaking a different language from that of President Uhuru and DP Ruto. Isn’t this the case? Why?

Duale: We are not in disagreement over war on terrorism. The President, his deputy and I are together on this. However, we will not allow few individuals in government to blacklist members of our community, including children, as terrorists, sympathisers of terrorists or terrorists’ financiers.

Are you not worried that you could be politically blacklisted or isolated for taking a hard stand that appears to contradict your bosses?

I am a serious stakeholder in the government. I am also the Leader of Majority, courtesy of a negotiated political agreement. And my position is that the energy and zeal with which I have served and defended the Jubilee Government is the same one with which I will continue to defend interests and rights of the Somali and Muslim community in Kenya today.

The senior position you hold places you as a national leader who should protect the rights of all. Why are you an ardent defender of only a section of the Kenyan community?

As the most senior politician from the Somali community, I am the bridge between members of my community and the Jubilee Government. Muslims and members of the Somali community overwhelmingly voted for President Uhuru. And we appreciate the fact that today we occupy a more central position in the Government more than we ever did under the previous governments of Mzee Jomo Kenyatta, Daniel arap Moi and Mwai Kibaki. Ideally, we have a moral obligation to protect national security, because we are serious stakeholders in this country.

And why are you not as enthusiastic in defending Christians?

I do. In fact, following the recent blast in a church in Likoni, Mombasa, I went to Likoni to empathise with my Christian brothers and sisters, and political leaders of Mombasa County can bear me witness. While there, I mentioned that we could not continue to bury our heads in the sand as our churches remained targets of terrorists. And lest you forget, I am a political and not a religious leader, who even in my Garissa Township Constituency represents interests of everyone, including Christians who account for 30 per cent.

Let us turn to your controversial address at a rally in Eastleigh a couple of days ago, where you reportedly encouraged terrorists to instead do their thing in other places, like in Machakosa?

I want to state categorically that this was the work of erroneous translation by one media house. What I said in Eastleigh was taken completely out of context. I was simply asking the residents of Eastleigh to be more vigilant in identifying and smoking out terror suspects. And I drew a parallel with Machakos to the effect that terrorists cannot operate in that county comfortably because residents will expose them. I stand by this position and I challenge anybody in doubt to take the same video to a linguist in Somali language for apt translation.

Nonetheless, are you apologising to the people of Ukambani over this development as demanded by opposite colleague in the National Assembly, Minority Leader Francis Nyenze?

I want to assure my brother (Nyenze) that these allegations are just that and I therefore owe nobody an apology. This translation must have been made to serve other people’s political interests.

But do you realise the seriousness of the war on terrorism and why the President and his Deputy may be disturbed by your partisan approach?

The President and his deputy need not worry because I am being realistic and not partisan. Terrorism knows no tribe or religion and if Kenyans must know, I am a classic example of what terrorism can do. Between 2011 and now, I have lost 69 people in my constituency. It is wrong to equate terrorism to Islamism because the Quran teaches us that if you kill one life you have killed the whole mankind and if you save one life, you have saved the entire mankind.

Separately, are you not concerned that you may be facing political isolation already? Or how do you explain the fact that members of the President’s TNA party spearhead the push for your censure, while your own URP colleagues have remained mum?

I am a senior member of Jubilee Coalition and 14 other small parties and there was no need for members of my party to defend me. Against who or what? Regarding the Press conference by a section of MPs attacking me, it was not the President’s party but rather Kigumo MP Jamleck Kamau and his friends. This was not a TNA affair but an act by a vengeful individual and time will tell what exactly is itching him.

What would you tell parliamentary colleagues from the Somali and Muslim community, some who have advised that you quit Jubilee and form an alternative political outfit if push comes to shove?

I have already formed a giant political party called URP and I do not see the need of forming another outfit. As chairman of 36 Somali MPs across the political divide and a member of another caucus of 67 legislators from the Muslim community, I instead want to encourage them to join me in URP and boost my political growth from within. I want URP and Jubilee to thrive and live as long as South Africa’s ANC.

Amid all the drama and current dust raised by yourself, do you still relate well with the President and his deputy?

Nothing, in my opinion, has changed. I seriously believe in the political ideologies of President Uhuru and his Deputy, and I trust only they can transform this country to the very great heights that we all dream about. I am particularly humbled by the support of my political teacher and twin brother, who is none other than the DP.

Only six years in elective politics and you are the third highest political figure in the Jubilee Government. What do you attribute this realisation to?

I am a very honest and down to earth politician, who by nature interacts freely even with the most downtrodden. I also thank God for scaling the political heights fast.

Finally, you threatened to quit Jubilee if the Government continued with what you regarded as mistreatment of members of your community in the on going anti-terrorism crackdown. Are you still quitting?

I have since led two delegations of leaders from the Somali and Muslim community to the President and our concerns have been addressed. In fact, I believe that we should approach the next General Election as a team preceded by a merger between TNA and URP, contrary to the thinking of some, like Jamleck, who want to reduce President Uhuru’s administration into a Murang’a County affair. Sources : Kenyan Standard and HAN Reporter.