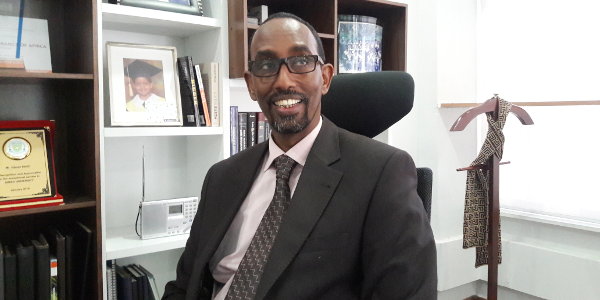 NAIROBI (HAN) June 2.2016. Public Diplomacy & Regional Security News. For decades, Somalia has been perceived as a volatile state – riddled with failed institutions, extremist fighters and a population living with hunger and little hope. But to a Shariah-compliant insurance company, Somalia provided the opportunity to be a first-mover in a market that holds economic promise.


Takaful Africa Group opened its first office in Somalia in mid-2013, providing a range of insurance products on a risk-sharing model guided by Islamic principles. The company now operates nine branches in the country.

“We have 60 employees and we write good premiums. Last year we wrote US$3m,” says Hassan Bashir, CEO of Takaful. “It is going well.”

The group has its roots in Kenya, where Bashir founded the first fully Shariah-compliant insurance company Takaful Insurance of Africa (TIA) in 2011. The group intends to expand regionally and Somalia is its first market outside of Kenya.

One should not assume that Somalis are buying insurance because of instability and security fears. Bashir notes that traditionally insurance thrives in an environment where there is positive prospects and hope.

“People think more insurance would be bought because, for example, there is conflict or there is [an] election. That is [not true]. More insurance [is] bought when society is stable and economically settled – when people can really think about growing their businesses. More insurance is not bought because there is a war and you are afraid your car or your house will be burned. No, then you are thinking about selling it and running away,” Bashir explains.

He argues Somalia is moving towards greater stability, and that confidence in the country’s future is improving. Just recently the International Monetary Fund (IMF) agreed to monitor and support an economic reform programme that is being implemented by the Somali government. Last year MasterCard became the first international payments network to enter Somalia. A number of foreign lenders, including two Kenyan banks, have also applied for licenses to operate in Somalia, taking advantage of the government’s push to open up the industry to international players.

Since Somalia’s 1991 collapse into anarchy – that was followed by two decades of conflict – global media has portrayed the entire country as being volatile and unstable. But Bashir notes there are regions that have enjoyed peace and stability, especially the northern parts.

“I think there is a certain element of exaggeration in how things are reported,” he says.

“I guess some sanity remained because business was there,” says Bashir. “The world knows Kenya as the most sophisticated mobile money system – but that is [actually] Somalia, not Kenya. There is no cash [in Somalia], they have stopped using cash.”


Bashir grew up in Kenya’s northern region, which borders Somalia, and hosts the Dadaab refugee complex that has been home to many Somali refugees. He is a fluent Somali speaker and understands the culture. But even for him, the business environment presented some surprises.

One of these is how the third-party liability system is managed by society. For example, when a car is hit and badly damaged, the clan of the person in the wrong, steps forward and pays for the damages. Hence, unlike in other markets where insurance companies deal with each other to settle third-party liability claims, in Somalia Takaful would have to repair its client’s vehicle and collect a refund, not from another insurance company, but from the family of the driver who was responsible.

“[If] we have insured your car [and] her car knocks yours, [but] she doesn’t have insurance yet, we actually tell her to organise the third-party liability and her clan will come together and bring that [payment]. It is accepted and the police will write the abstract,” says Bashir. “So there is an underlying traditional insurance system.”

“We are underwriting now with that culture in mind. The product development takes that into consideration. Cars are stolen… and as long as the [thief] is known, his family will pay. So it is much more efficient in that way. I am an insurer in [Kenya] and hardly do you ever recover a car that has been lost. In Mogadishu you recover – families talk to families and the car is brought back.”

Somalia: Minister Appointed the Director of the National Intelligence and Security Agency

Russia’s Red Sea Base In Sudan Is A Recalibration Of Its...