Home Ethiopia In Ethiopia, your holiday really can change lives 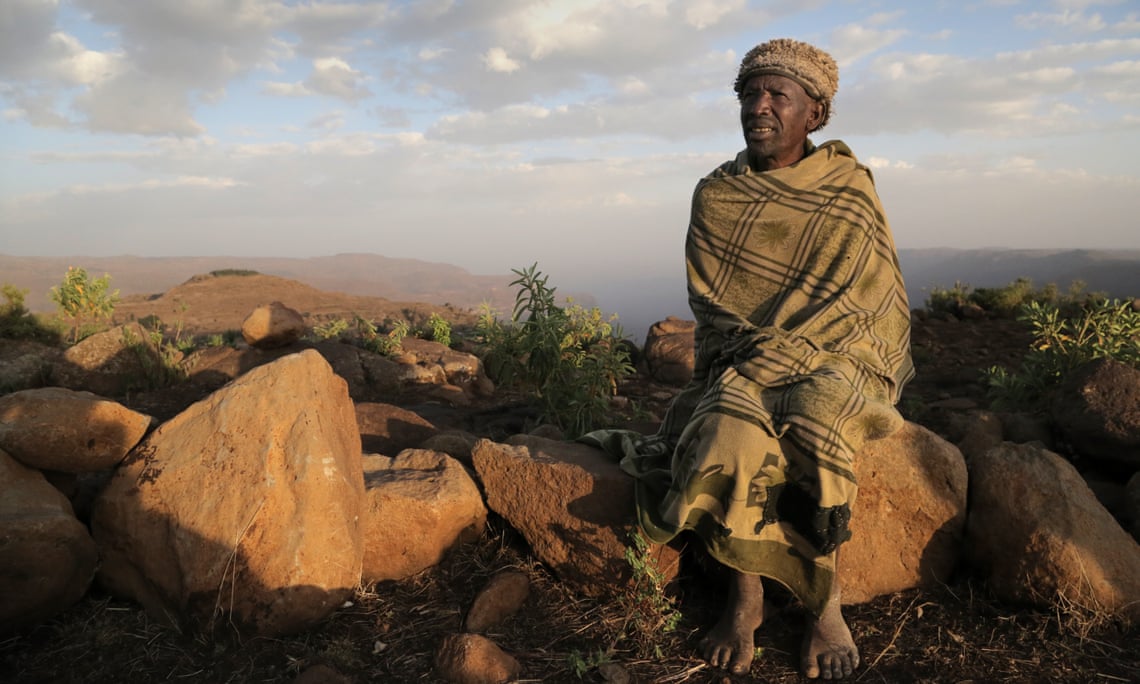 e arrive at sunset. The guesthouse sits on a rising prow of rock with dizzying views of the vast gorge below. The altitude is around 3,000 metres, and after six hours’ walking, I am tired. Inside the thatched hut, two young women are tending a fire where the shiro, a kind of bean stew, is cooking. I glance out of the small window and a lammergeier, a bearded vulture, comes sailing past. Perhaps he, too, is drawn by the smell of food. This is a hungry land. My guide, Suleiman, comes in and we chat to the women, who seem very excited and happy.

They laugh even more, exchanging glances. “We have never earned money before,” says one of them, Daragut.

“It’s true,” says Suleiman, “They will get 30 birr a day, about $1, for each visitor that comes. You are the first.” Hence the excitement.

Daragut elaborates a little. “We will save up and open our own coffee shop.”

I am in a tiny Ethiopian settlement called Khaled Abo in the Janamora district, an area bordering the Simien Mountains in the north of the country. Two days earlier, Suleiman and I had left the town of Gondar and been dropped off at the head of a footpath into the mountains. There we found a drover and donkey ready to take our luggage.

The nature of the trek was soon revealed: five days through a landscape of fabulous mountain panoramas populated by people with not an ounce of spare flesh on them. Farms are mostly a quarter of a hectare – just over half an acre – of desperately over-grazed hillside terraces. When the rains allow it, they grow wheat and barley. Some have small flocks of sheep; most have lots of children. None has electricity or running water. Bordering their land is the Simien Mountains national park, a major tourist attraction where visitors pay hundreds of dollars to be shown ibex, gelada monkeys and, with a bit of luck, a rare Ethiopian wolf. There is no evidence of that tourist money ever reaching these people.

I am the first visitor on a tourism project that aims to address that, bringing money, employment and development to some of the communities around the park. Around 500 families have worked together to make a string of guesthouses, linking a superb route through their homeland. The sense of expectation and hope is palpable. For women like Daragut, the fantasy of owning a coffee shop has become a tangible ambition.

I had my doubts about tourism in such a famished land, but from the start the welcome is overwhelming. On day one, a farmer invites us into his house, a simple hut partially plastered with cow dung and mud. The wind puffs dust through the cracks. One half of the main room is divided off for animals. There’s no furniture, just some sacks of grain to sit on. It’s United Nations food aid from Switzerland, says Suleiman: “They get 45kg of wheat every month.”

These stick-thin people, I realise, are not only living on an actual cliff edge, they are permanently on the brink of disaster. One failed rainy season would finish them. I wonder if it’s right to be here.

The farmer is adamant that it is. “We need visitors,” he tells me. “Not just for money, but to learn about the world.”

Throughout the trek I hear this repeatedly. There’s an almost desperate urge among the people to be connected to the world, and to see some change.

At Khaled Abo, I sleep well in the cold mountain air, rising at dawn to stand on the edge of this precipice. As the sun comes up, I distinctly hear a leopard cough directly below me. The curious thing about the landscape is that while every square inch of flat land is farmed, the vertiginous cliff is a wild wooded habitat for gelada, rare birds, hyenas, wolves and, as I discover, big cats. Simien is isolated from other mountain ranges and has evolved a unique flora and fauna.

By day four I am in the swing of walking and Suleiman is coping well with his first-ever tourist, learning to point out things of interest. By day five, his attempts to teach me Amharic are even paying off. I can greet everyone and get the plurals and gender correct – handy at the wedding ceremonies we are invited to, or in the “honey beer” bars.

This trip is certainly not for everyone: the simple food and lack of creature comforts are a challenge. The rewards are to see a region that few outsiders ever visit, to meet people isolated from the outside world, enjoy spectacular landscapes without modern infrastructure, light pollution and litter. The big reward, however, is to see your holiday become the source of someone else’s dreams.

On my last day of walking, I fall in step with the donkey man, Adelalaw. We are on the escarpment again, on a path snaking along the edge of a steep precipice. I ask how much he earns in a year. “Last year, I sold one sheep for 600 birr and made 1,500 birr from selling beans.”

That is about £70. For transporting my bag for the entire trek he is getting 800 birr: around five months’ money in less than a week. Money that is going directly into his pocket.

“What do you think of tourists coming here?” I ask.

“It is something good,” he laughs. “Something very, very good.”

• The trip was provided by Tesfa Tours , whose six-night trek in Janamora Woreda for four people costs $560pp, including transfers from Gondar, food, accommodation, guide and pack animal, but not bottled drinks. The company recommends linking this trip with a few nights’ camping in the national park, a stay at Limalimo lodge and other extensions such as Lake Tana and Lalibela.The guesthouses and tour were set up with the assistance of Village Ways winner of the 2017 WTM responsible tourism award. Flights were provided by Ethiopian Airlines, which flies daily from Heathrow to Gondar via Addis Ababa from £665 return

… we’re asking readers to make a new year contribution in support of The Guardian’s independent journalism. More people are reading and supporting our independent, investigative reporting than ever before. And unlike many news organisations, we have chosen an approach that allows us to keep our journalism open and accessible to all, regardless of where they live or what they can afford. But this is only possible thanks to voluntary support from our readers – something we have to maintain and build on for every year to come.