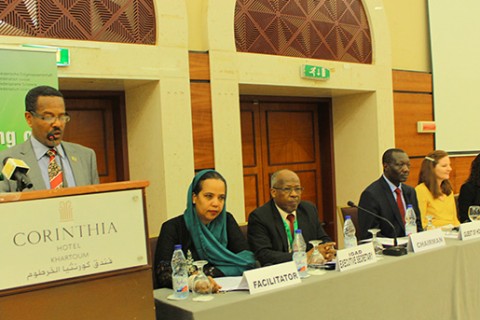 Khartoum: The 7th Meeting of Regional Consultative Process on Migration (RCP) of the Intergovernmental Authority on Development (IGAD) was launched this morning 2016 in Khartoum to consider recommendations of the Regional Migration Coordination Committee that closed on May 17th at the same venue after two days of successful deliberations restricted to IGAD Member States (see press release on the 4th Region Migration Consultative attached below).

The two main recommendations that emanated from IGAD Member States during this 4th RMCC meeting are the strengthening of National Coordination Mechanisms (NCMs) and the inclusion of IGAD as an institution in the Khartoum Process. The Khartoum Process, launched in October 2014, is aimed at strengthening all efforts in order to combat smuggling and human trafficking by addressing the root causes of migration and irregular migration.

During a brief opening ceremony presided over by Lt-General Awad Elneel Dahiya, Head of Passport, Immigration, and Civil Role Corporation-Sudan, and chaired by State Minister of Justice of Ethiopia, H.E. Mr. Mesfin Abebe, in the presence of the Director of Economic Cooperation and Social Development Division-IGAD, Mr. Elsadeg Abdallah, the First Secretary-Embassy of Switzerland to Sudan, and the Head of the International Migration Organization (IMO)-Ethiopia,

In his opening remarks, Lt-General Dahiya lauded IGAD Secretariat for their efforts in bringing together IGAD Member States in view of harmonizing national level legislation and regulations in regards to migration.

Director El Sadeg thanked the Swiss government for the financial support provided to IGAD the Migration Programme and IOM for the partnership.

The RCP provides a regional platform for senior officials of IGAD Member States and representatives of development partners as well as other relevant stakeholders to report and engage on the status and dynamics of migration governance in the region. The goal is to have an information exchange on the topic and to learn from each other with a view to strengthen national and regional coordination efforts in the IGAD region to better address regional migration initiatives and programmes.

The theme for this 7th RCP is: “Strengthening national and regional coordination efforts in the IGAD region to better address regional initiatives and programmes”.

Since establishment in 2008, this RCP platform has ensured that IGAD Member States remain seized with different migration issues in the region ranging from migration and development, irregular migration, labour migration, human trafficking and smuggling of migrants amongst other issues.

Major stakeholders include the International Organization for Migration, the African Union, the European Union, the Common Market for Eastern and Southern Africa (COMESA), the East African Community (EAC), United Nations agencies such as the UNHCR and the ILO, as well as the World Bank and selected IGAD Partners’ Forum (IPF) members such as the Netherlands and Germany