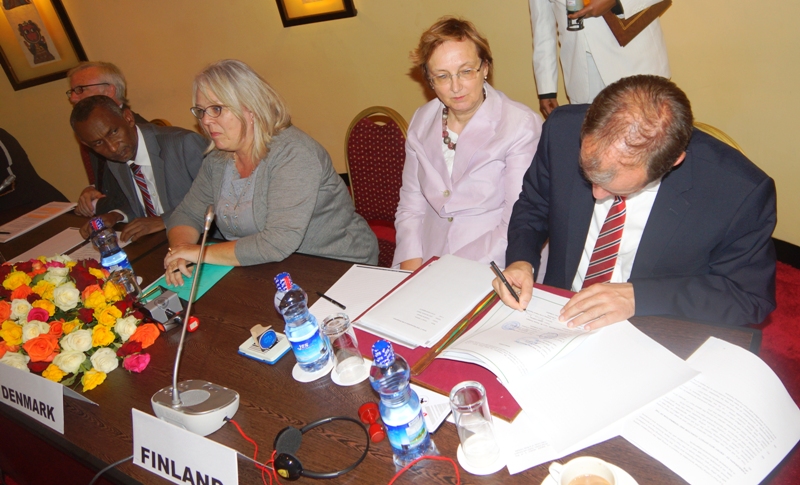 Addis Ababa. The IGAD Partners Forum (IPF) comprising of the development partners of IGAD met the IGAD Committee of Ambassadors who represent the IGAD Member States on June 7, 2016 in Addis Ababa.

The Forum was updated on the IGAD Regional Strategy, new IGAD Treaty and as a highlight of the day partners signed a Joint Programme and Financing Arrangement (JPA/JFA) with IGAD in support of the IGAD Peace and Security Strategy and the third phase of IGAD Institutional Strengthening Action Programme (ISAP III).

IGAD Partners Forum has been in existence since IGAD’s set up in 1986 initially known as The Friends of IGADD; an initiative formed by donor agencies and has since them supported the implementation of different programs and projects undertaken by IGAD for a more secure and developed IGAD region.

The JPA/JFA, which is a follow up of the earlier arrangements, aims at creating a single, coherent and predictable mechanism for enhanced coordination, regular dialogue and harmonization of Partners’ support in the spirit of Paris Declaration, Accra Agenda for Action and Bussan Declaration. The signing of the JPA/JFA marks a major milestone as it provides a mechanism under the Joint Programme Arragement to engage with partners who cannot pool their funds in the framework of a JFA for various policy reasons. Four partners (Denmark, Finland, Germany and the Netherlands) signed the JPA/JFA during the IPF meeting and it is expected that more partners will sign the document in the coming few months.

His Excellency Amb. Mahboub Maliim who chaired the two hour meeting extended IGAD’s heartfelt gratitude for the endless support and advice that the Forum has rendered to the organization to attain the milestones that have been achieved so far and those planned ahead.

The Committee of Ambassadors Chair, Amb. Shamebo Fitamo Adebo also expressed his appreciation and called for regular meetings between IPF and the Committee to help in strengthening the relationship between IGAD and its development partners.

The IGAD Partners Forum Co-Chair, Amb. Giuseppe Mistretta; Ambassador of Italy to Ethiopia pledged the IPF support to IGAD and called for improved competencies within IGAD and expand widely activities beyond peace and security now that the region is getting stable.

“ We are committed to IGAD and call for increased activities in the areas of integration and cooperation and called upon IGAD to re-brand it self as a multi tasking organization for more donor support and consideration” advised Amb. Mistretta.

The First Councellor , Peace and Security Section of the European Union; Jean-Francois Hasperue called upon the IGAD Member States to adopt the new treaty and support fully the implementation of IGAD Regional Strategy and the activities and plans included therein for collective development and growth.

The Forum was updated by the Committee of Ambassadors on the just endorsed IGAD Sectoral Strategies and Implementation Plans and the endorsement of the new IGAD Treaty to be tabled before the Council of Ministers and Heads of State for their approval.

His Excellency Mahboub Maalim on behalf of IGAD promised continued accountability, engagement between the Forum and IGAD Member States, improved policy and technical dialogues and monitoring and evaluation of programs for the benefit of the IGAD Region.