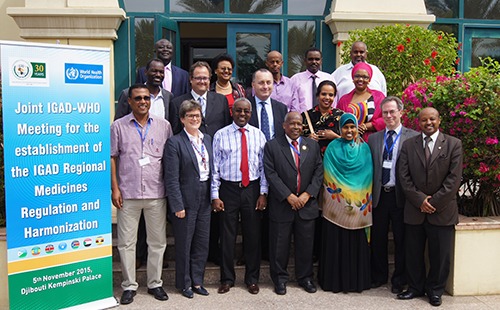 Djibouti (HAN) November 9, 2015. Public Diplomacy & regional Security.  Senior officials of the Intergovernmental Authority on Development (IGAD) and the World Health Organization (WHO) held a joint meeting yesterday in Djibouti to discuss the development of a regional program to regulate medicines and other medical products.

Welcoming the officials on behalf of the Executive Secretary, the Director of Economic Cooperation and Social Development at the IGAD Secretariat, Mr. Elsadig Abdalla pointed out that though the porous nature of borders in the region had facilitated a profitable movement of people and animals, goods and services in the spirit of integration, illegal and counterfeit medicines that are hazardous to human and animal health had also found their way through.

“It is our mandate and responsibility as a regional organization to support and coordinate efforts and initiatives to address such critical issues for the benefit and safety of our people,” he stated, noting that quality assurance mechanisms in the region were weak mainly because of insufficient regulatory systems. Mr. Abdalla further noted that the region was severely affected by the burden of Substandard, Spurious, Falsely labeled, Falsified and Counterfeit (SSFFC) medical products, calling for joint collaborative efforts to address the root causes and challenges, as well as availing necessary resources to establish and strengthen harmonized national regulatory systems.

Opening the one-day meeting that brought together officials of WHO from the Headquarters in Geneva, the Regional Offices for Africa and Eastern Mediterranean, as well as the Djibouti Country Office, the IGAD Secretariat and its Health Programs, the Permanent Secretary for Health of Djibouti, Dr. Ali Sally, said that his country was ready to support action plans and practical proposals for the realization of the recommendations that would be made by the joint meeting.

“The people and the Government of Djibouti will support, assist and facilitate in every way possible to make your recommendations and proposals are realized to ensure the safety and wellbeing of the populations in the region,” he promised.

In his statement, the WHO Representative in Djibouti, Dr Ritter Von Xyllander Severin, reaffirmed the commitment of the UN agency to continue working with IGAD providing technical support including assistance in resource mobilization for the development of the Regional Medicines Regulatory Collaboration and Harmonization Program.

“This meeting is not only important to the region, but a true demonstration of intergovernmental cooperation for the benefit of the region and beyond,” he remarked, appealing for the involvement and engagement of the member states and other stakeholders including the private sector and civil society.

The officials drafted a joint statement that will be released as soon as it has gone through institutional approval processes.