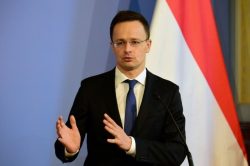 Ambassador Gabor Sagi told ENA that for his visit to Ethiopia, the foreign minister is accompanied by 20 Hungarian investors and Ethio-Hungary business to business forum is also set to take place.

Ambassador Sagi indicated Hungary has a strong desire to bolster its diplomatic and economic relation with Ethiopia and the country’s decision to re-open its embassy in Addis Ababa manifests this need.

Ethiopia’s role as Africa’s diplomatic center coupled with its persistent economic growth is the factor for Hungary to re-open its embassy in Addis Ababa, according to Ambassador Sagi.

He noted that Foreign Minister Péter Szijjártó’s visit is also the manifestation for Hungary’s need to renew its historical tie with Ethiopia and to transform it to a higher level of trade and investment cooperation.

During his stay in Ethiopia, Hungary’s Minister of Foreign Affairs Péter Szijjártó will confer with his Ethiopian counterpart Dr. Tedros Adhanom on ways to consolidate relations in trade and investment fields.

Avoidance of double taxation, investment protection and visa waiving for diplomatic passport holders are among the agreements the two foreign ministers would sign.

In spite of the age-old Ethiopia’s diplomatic relation with Hungary, the trade and investment relation has not reached at the desired level.