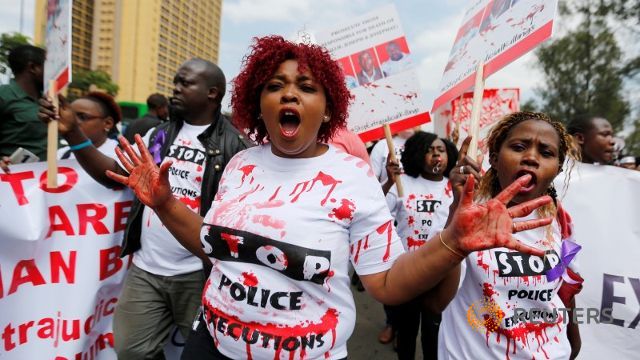 NAIROBI (HAN) July 4.2016. Public Diplomacy & Regional Security News.  About 300 people marched through the Kenyan capital on Monday to protest over what they said was the extrajudicial killing by police of human rights lawyer Willie Kimani, his client and their driver.

Rights groups in Kenya, where members of the public often complain about police corruption, have accused sections of the police service of involvement in extrajudicial killings, including in the case of Kimani, his client Josephat Mwendwa and taxi driver Joseph Muiruri, whose bodies were found last week.

Police officials say they investigate and prosecute any officers suspected of breaking the law.

After lodging a complaint alleging he had been shot and injured by police, Mwendwa was charged with a range of offences, including possessing drugs and resisting arrest, activists said.

The authorities said on Saturday that three police officers had been arrested in connection with the deaths of the three men, who disappeared after a court hearing on June 23 .

“The shocking abduction, enforced disappearance and extrajudicial killings of lawyer Willie Kimani, as well as his client and their taxi driver … should be cause for alarm over the state of human rights and rule of law in Kenya,” rights group Amnesty International wrote in a statement on Monday.