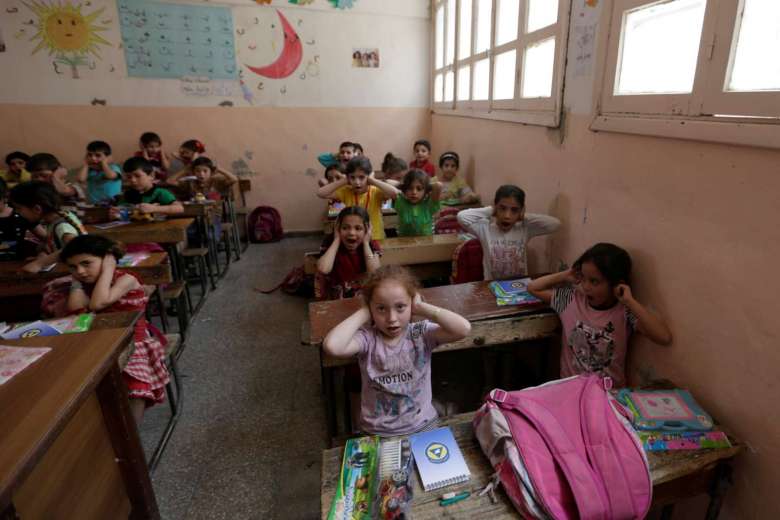 A crisis fund has been launched to raise $3.8-billion (U.S.) to help millions of children missing out on school because of war or natural disasters, U.N. special envoy Gordon Brown announced on Monday at the first ever World Humanitarian Summit.

Nearly 75 million children living in areas affected by war or natural disaster had their education disrupted last year, leaving them prey to child labour, trafficking and extremism, according to research published in March.

The fund aims to help more than 13 million children and young people over the next five years, and 75 million by 2030.

“For the first time, we have a humanitarian fund targeting education,” said Brown, the former British prime minister and now U.N. Special Envoy for Global Education.

“A fund that plans – not just for weeks or months – but for years in support of a child’s development. And a fund with a contingency reserve allowing us to act when a crisis hits ensuring no begging bowl has to be circulated,” he added.

On average, only two per cent of global humanitarian appeals are dedicated to education. Despite growing needs, funding for education in emergencies has almost halved since 2010, according to the London-based Overseas Development Institute (ODI).

“Without school, young children caught up in emergencies are at risk of becoming the youngest labourers in the field, the youngest brides at the alter, the youngest soldiers in the trench, and in some cases, the youngest recruits vulnerable to extremism and radicalization,” Brown said.

Education is one of the items on a broad agenda for government and business leaders, aid groups and donors gathered in Istanbul for the two-day summit.

They want to try to develop a more coherent response to what U.N. chief Ban Ki-moon has called the worst humanitarian situation since World War Two, with 130 million people affected by war or natural disaster.

Nobel peace laureate Malala Yousafzai urged world leaders ahead of the conference to match their words with action.

“I call on world leaders in Istanbul to be generous and back up their words with political will,” she said.

“They must deliver on each and every commitment they make, including fully funding the new Education Cannot Wait initiative.”

An average of four schools or hospitals are attacked or occupied by armed groups every day, the U.N children’s agency (UNICEF) said ahead of the summit.

In Syria alone, more than 6,000 schools are out of use – attacked, occupied by the military or taken over as an emergency shelter. And in conflict-hit Central African Republic, a quarter of schools are not functioning, UNICEF said.

“Education is an absolutely vital investment both for those children’s futures, but also for the futures of their communities and their countries,” Jo Bourne, UNICEF’s head of education, told the Thomson Reuters Foundation.

Since war broke out in 2011, Syria’s education standards have dropped to the levels of South Sudan – which has some of the world’s worst levels education – said Kevin Watkins, executive director of the think-tank ODI.

“That’s in part because of the failure of the international community to respond with the right type of funding at the right time,” Watkins said on the sidelines of the summit.

Education for children in Syria and its neighbouring countries is massively underfunded, he said. Funding is needed consistently, so children’s schooling is not disrupted.

“If you speak to the kids and parents concerned, they regard (education) as an absolutely fundamental priority. And there is something that you can do about it,” Watkins said.

The new fund will pool resources from government and private donors, to be used by local NGOs – who can deliver education much more cheaply and quickly than the World Bank or U.N. agencies, Watkins said.

“At the moment … almost all the money mobilized … trickles down incredibly slowly, after quite a lot of it has been removed because of the costs of the system, and it delivers pretty meagre results on the ground,” he said.

“I think this (new fund) ticks a lot of the boxes for fixing things that are clearly wrong in the system.”