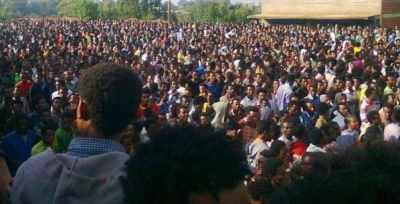 Plans to allocate farmland in Ethiopia’s largest region surrounding the capital for development sparked fierce demonstrations in November and spread for months, in the country’s worst unrest in over a decade.

Ethiopia has long been one of the world’s poorest nations but has taken impressive strides to industrialise its agrarian economy in recent years. However, reallocating land is a thorny issue in the country of 90 million people whose majority are subsistence farmers.

Authorities scrapped the land scheme in January, but protests and arrests continued.

The government rejected the findings of the report, saying there was no evidence to back up the death toll it cited.

In the 61-page report, U.S.-based Human Rights Watch (HRW) said Addis Ababa deployed its military and used live ammunition for crowd control repeatedly as the protests spread, “often with little and no warning”.

The watchdog said tens of thousands have also been arrested during the crackdown, whose scale was described as unprecedented by witnesses in the report titled “Such a Brutal Crackdown: Killings and Arrests in Response to Ethiopia’s Oromo Protests”.

Government spokesman Getachew Reda said HRW had “plucked its numbers from thin air”, adding a domestic rights watchdog had carried out its own report. That body tallied 173 deaths.

“Even one person is one person too many. The government regrets the fact that people are killed because these were avoidable deaths,” he said at a press conference on Tuesday.

“But we believe in many parts of Oromiya where the protests were quite common, security forces conducted themselves in a very professional and responsible manner.”

The protests were a rare expression of dissent in a country where police are feared as heavy-handed and the government is seen as repressive.

Ethiopia’s Prime Minister Hailemariam Desalegn has said his administration would address grievances in the Oromiya region and has blamed rebel groups for stoking violence.