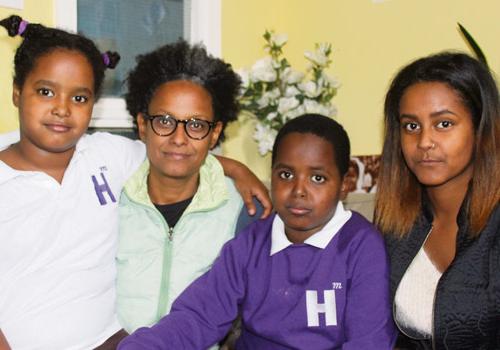 Share on Facebook
Tweet on Twitter
Addis Ababa (HAN) October 12, 2015 – Public Diplomacy and Regional News. by KOOS COUVÉE. The daughter of a British man held on death row in Ethiopia has been lauded with a human rights award for a play she wrote with her friends about her father’s plight.

Helawit Hailemariam, 16, from Clerkenwell, was awarded the Christine Jackson Young Person Award by the charity Liberty in recognition of her ongoing battle for the release of her father, the Ethiopian-born democracy activist Andargachew Tsege, 60.

“We need help for our campaign to get my father back,” Helawit, who is studying for her A-levels at City and Islington College in Angel, said. “I really did not expect to to win the award. It defin­itely helps our campaign, it makes my father’s story more real and it validates it.”

In June, Ask, a new play by Islington Community Theatre starring Helawit and five of her friends marked the anniversary of her father’s kidnapping on the command of the Ethiopian government while he was travelling through Yemen last year. He was on his way to Eritrea to attend an opposition conference.

Helawit said she wants to go on tour with the play too, in the hope this will put pressurise on the UK government to press the Ethiopians to release Mr Tsege. “I want the British government to listen and do much more. They haven’t done very much at all,” she added.

Ask will be performed at Hugh My

Until recently the Ethiopian authorities refused to tell his family where Mr Tsege, 60, was being held. But last month the UK ambassador met him at Kaliti jail, a notorious state prison located just south of the capital Addis Abbaba, commonly referred to as a gulag.

The family has not been allowed any contact. There is also no sign Ethiopia is following any kind of legal process.

Helawit’s mother Yemi, 45, has been campaigning tirelessly for her partner’s release. This week she wrote to foreign secretary Phillip Hammond to express her anger after Britain’s most senior Foreign Office official said human rights are no longer a “top priority” for the government, adding the Conservatives’ “prosperity agenda” was now “further up the list”.

“We are the human face of this policy,” she wrote.

Islington North MP Jeremy Corbyn, who has campaigned for Mr Tsege’s release, said he would continue to do so “with the same vigour” now he is Labour leader.

“The release of Andy Tsege should be a political priority as his ongoing safety is a real concern,” he said.

“I have been working to secure the release of Mr Tsege for some time and I have given a firm commitment to his family that I will continue to press for his release now that I am leader of the opposition, with the same vigour.

“I am working closely with [human rights charity] Reprieve to this end and it is long overdue that the Prime Minister intervenes to help secure Andy’s release as soon as possible”.

A petition calling on the Prime Minister to intervene with the Ethiopian government and demand the safe return of Mr Tsege has been signed by more than 127,000 people. islingtontribune