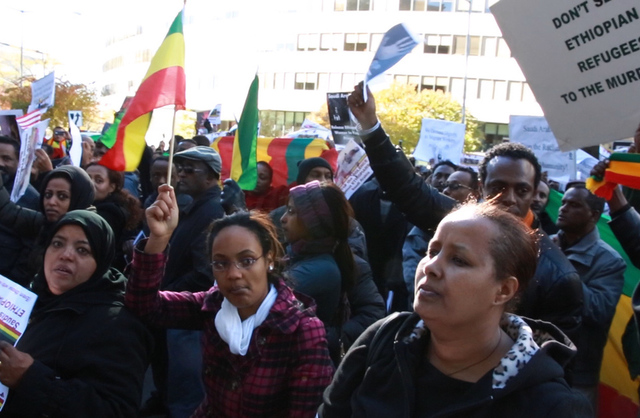 In an indisputably the largest turnout by Ethiopians in Washington DC, Ethiopians from all walks of life, the youth and the seniors, women and men, religious leaders and political activists, came out in record numbers shutting downtown Washington, DC for most of the day on Monday, to denounce the tyrannical regime in their home country and demand the US stop financing a murderous regime.

The demonstration was not the first but the size and energy of the crowd was notably the highest despite the drizzling rain that was unrelenting all day in the nation’s capital. Neither was this the first time that Ethiopians came out to protest in front of the US State Department and the Capitol, closing major thoroughfares in downtown DC.

They shout in rage as they walk down Constitution Avenue towards the Capitol Hill condemning the killing of hundreds of their compatriots by the TPLF regime, an ethnic oligarchy that holds the country and the people hostage for a quarter of a century and rules with no legitimacy.

They waved the Ethiopian tricolor of green yellow and red and some were actually clad in matching costumes as they chant slogans calling for the attention of the international community as well as the US, a major financier of the Ethiopian regime, to the plight of Ethiopians back home.

Over a thousand Ethiopians were reportedly killed in just 2016 alone and tens of thousands were incarcerated for protesting against a ruthless regime. The protesters condemned the domination of the about 100 million Ethiopians by an ethnic minority clique that controls all aspects of the people’s lives.

Hundreds of protesters in the Oromo and Amhara regions of Ethiopia were gunned down by the brutal forces of the regime in the last few months alone as the international community turned a blind eye to the crises, which many believe could lead to civil war and possibly genocide.

The crises in Ethiopian is shaping up to have an ethnic dimension as the political power, the economy and all natural resources were controlled by the Tigrayan minority clique, excluding 95% of the populace. Those were the issues that the Ethiopians brought to the attention of the US and the world community at large in Monday’s rally that began at the US State Department at 9 o’clock in the morning and wind down at 4 p.m. at the US Congress.

Religious leaders and activists spoke on the need for the Ethiopians to come together as one, despite ethnic and religious differences, to do away with the regime. They stressed that Ethiopians in holding rallies were not begging the US to free them but demanding White House to stop being a road block in their fight against tyranny. The US is a major ally and financier of the regime in Ethiopia which congressmen recently demanded in a resolution serious scrutiny of the aid being given to the regime and investigation into the killings of peaceful protesters.

Similarly, Ethiopians in Paris and Tel Aviv took to the streets over the weekend denouncing the killings perpetrated by the TPLF regime against defenseless civilians. The Ethiopians came out in huge numbers at the Eiffel Tower expressing outrage against the massacre of the Oromos, Amharas and other ethnic groups by the brutal regime. At similar protest rally was held in Tel Aviv where thousands of Ethiopia Jews and others call it home, the crimes the TPLF is perpetrating with impunity was condemned.