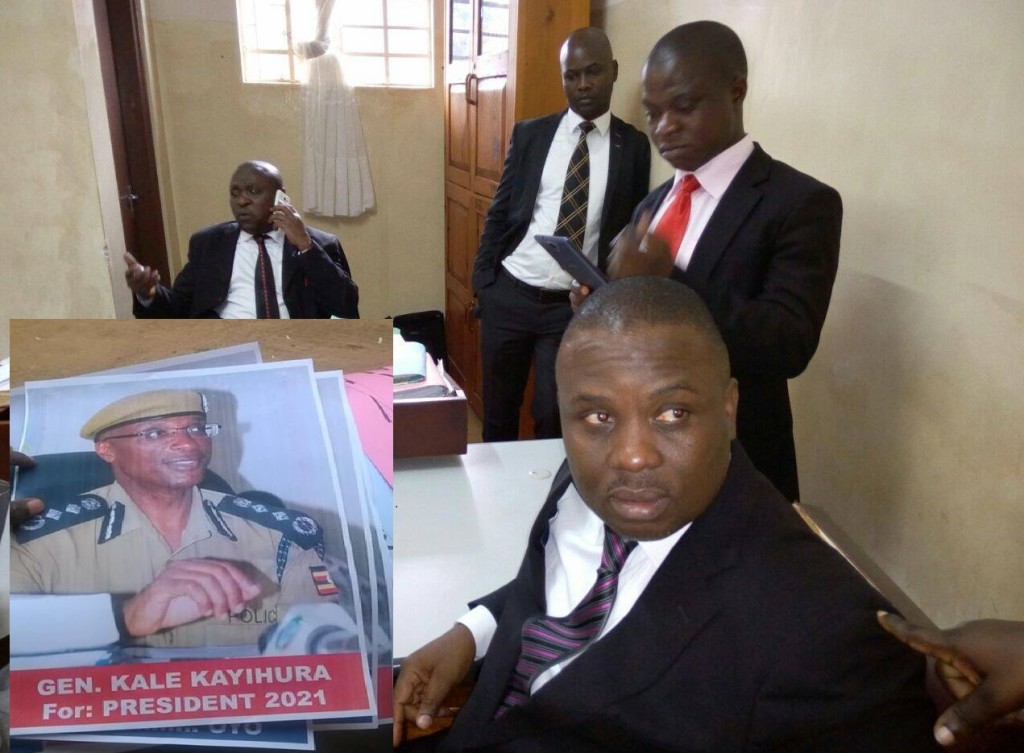 KAMPALA (HAN) August 11.2016. Public Diplomacy & Regional Security News. By: Stephen Kafeero. An angry mob protesting the trial of Uganda’s Inspector General of Police, Gen Kale Kayihura, Wednesday laid a siege on Makindye Magistrate’s Court baying for the blood of the lawyers and other people who took the police boss to court on accusations of torture against civilians.

General Kayihura together with other senior police commanders and officers were expected to appear in court Wednesday to answer to the charges but none showed up and no explanation was given either.

The court siege lasted more than three hours with the lawyers and other human rights activists seeking refuge in the chief magistrate’s chambers. It was reminiscent of the infamous Black Mamba invasion of the High Court when armed security operatives stormed its premises in Kampala on March 1, 2007, to re-arrest five treason suspects who had been released on bail.

Opposition leader, Kizza Besigye, had promised to attend the criminal proceedings against Kayihura but sources close to him said he withdrew at the last hour to avert possible clashes between his supporters and the security personnel.

It all started as a peaceful protest with hundreds of Gen Kayihura’s supporters submitting to security checks and holding their placards written in similar handwriting with messages expressing solidarity with the police boss.

“Police needs justice not injustice” read one placard “Silent majority stands with the Police,” read another.

As time passed by, the mob grew bigger and so was their aggression against any person suspected to support the Kayihura prosecution. Police commanded by the recently appointed Kampala Metropolitan Police Commander Frank Mwesigwa and his deputy Ezekiel Emitu looked on as the pro-Kayihura rioters, some of whom had kept an overnight vigil at the court tormented the judicial officials and those who had turned up to witness the trial. 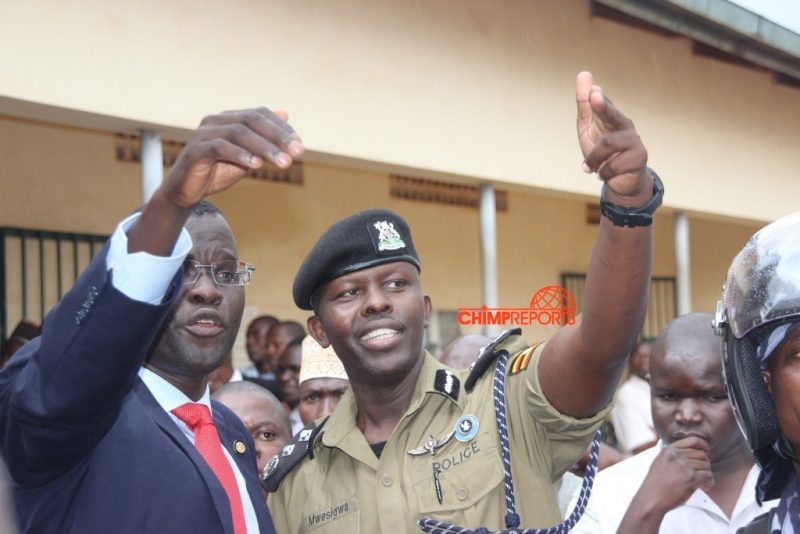 The demonstrators started making processions around the court buildings and outside its fence singing songs of allegiance to Kayihura.

Soon after, a group, which was chanting “no court,” stormed the chief magistrate’s chambers and blocked them, vowing to thwart any attempts to start court proceedings. This raid lasted about 10 minutes before police intervened and asked the pro-Kayihura mob to vacate the trial magistrate’s chambers.

Outside, the mob was growing impatient and agitated. They started blocking roads leading to the court using logs. Police officers, including its traffic personnel, looked on as chaos ensued.

The protestors proclaimed that Dr Besigye would not be allowed to come to court. They denied access to any vehicle including those of the Police.

The mob thoroughly checked all people leaving the court to prevent Kampala Lord mayor Erias Lukwago and other prosecution lawyers from getting out.

Journalists were not spared either. The pro-Kayihura mob threatened to beat any journalist for what they termed “biased coverage” against the Police and their activities.

Joseph Mutebi, a journalist with one of the local dailies, was assaulted by the mob.

First to leave was lawyer Emmanuel Chandia and his legal team which is prosecuting Kayihura. The police formed a ring around them to help them board the police vehicle. But the rioters taunted Mr Chandia and his colleagues as his wheelchair was loaded into a waiting van.

Next to attempt an escape from the mob was lawyer Abdallah Kiwanuka who was escorted by Police to his car parked outside the court premises. Soon after entering his Toyota Prado car, the mob began pelting it with stones and other objects.

He sped off through the mob as the rioters threw stones at his car from both sides of the road.

The vehicle was damaged but Daily Monitor could not readily establish whether he or the other occupants were injured in the assault.

Mr Kiwanuka is the same lawyer who was in 2013 brutalised by Police and plain-clothed security operatives as he served the then Kampala Minister Frank Tumwebaze with a court order stopping the botched impeachment of Mr Lukwago as Kampala Lord Mayor.

Infuriated by Mr Kiwanuka’s escape, the pro-Kayihura rioters continued to demand permission to punish Mr Lukwago and other lawyers who had sought refuge in the Magistrate’s chambers.

Negotiations directly led by Mr Mwesigwa on the Police side and the private prosecution lawyers on the other hand continued.

Human rights lawyer Nicholas Opiyo asked police to create a safe passage for them. He was shortly after driven out of the court premises.

Mr Lukwago insisted that as an officer of the court, Police should ensure his security to leave as a free man. Police then escorted him out of the magistrate’s chambers thinking he was heading to his car. He was instead taken to a waiting police pick up truck.

Mr Mwesigwa and his bodyguards overpowered the Lord Mayor and pushed him into the police van which drove off, escorted by three police mambas and two other vehicles amid shouts from the mob.

Several people and groups took to social media or issued statements about the violence.

“If someone files a case against you that you believe to be foolish and lacking in merit, don’t get a mob. Get a lawyer. They know what to do,” lawyer David Mpanga who was one of the people caught up in the 2007 court siege tweeted.

Mr Crispy Kaheru, the coordinator of the Citizens’ Coalition for Electoral Democracy in Uganda (CCEDU), said Kayihura’s failure to appear before court casts doubt on whether he or the institution of Police respect the judicial processes. “He has acted in contempt of court. His actions may be, reflective of what he thinks about the court, the judicial system and the laws of Uganda. Unfortunately, one could argue that he has acted in a way, which demonstrates that he, as an individual is above the laws of Uganda.”