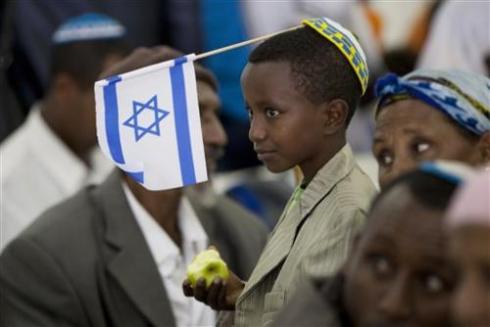 Tel Aviv (HAN) May 18,2015. Public Diplomacy, Regional humanitarian, Security News. Israel did not do enough for Ethiopians making their way to Israel, President Reuven Rivlin said Sunday, admitting years of failings as the Ethiopian-Israeli community held a memorial for those who died while trying to reach the Jewish state.

The official memorial ceremony, also attended by Prime Minister Benjamin Netanyahu and other dignitaries, came as Israel has wrangled with what some see as a history of institutionalized racism against the community that has recently bubbled to the surface in a series of protests.

“We didn’t see, we didn’t act correctly and we did not listen enough,” Rivlin said at the ceremony at the Mount Herzl cemetery in Jerusalem.

“However, in addition to our need for criticism and recognizing [our wrongs], it is upon us to believe in our ability to correct,” the president added.

“The State of Israel cannot allow the best of its sons and daughters to feel they are disconnected and alienated,” he said.

Between 1979 and 1990 Israel organized several transports of Ethiopian Jews to Israel via Sudan. Hundreds or, by some estimates, thousands of people died on the trip from Ethiopia to the Sudanese camps from where they left to Israel.

However, many in the community say that upon reaching Israel, they were met with a country that did not do enough to integrate them into society.

A video of police beating a black soldier for seemingly no reason that surfaced in late April set off a wave of protests, including one in Tel Aviv that turned violent, with dozens injured and arrested.

Another demonstration is scheduled for Monday in the city.

At the ceremony, Netanyahu, whose fourth government was sworn in Thursday, said he would form a special ministerial committee this week to address all issues of discrimination and racism.

“We will bring a comprehensive plan to the government to assist you in every way,” the prime minister said. “There is no room for racism and discrimination in our society, none.”

Netanyahu said that a meeting he had with community leaders earlier this month to discuss the issues was “emotional and moving.”

“We will turn racism into something contemptible and despicable. There are societies that have succeeded in rising above this filth.”

Following his meeting with the Ethiopian community two weeks ago, Netanyahu vowed to “fight racism and discrimination in any way possible.”

The prime minister also acknowledged the hardships the communtiy faced making it to Israel.

“In Jerusalem we heard your cry,” Netanyahu said in his speech, “the whole nation heard it; I did as well.” TimesofIsrael