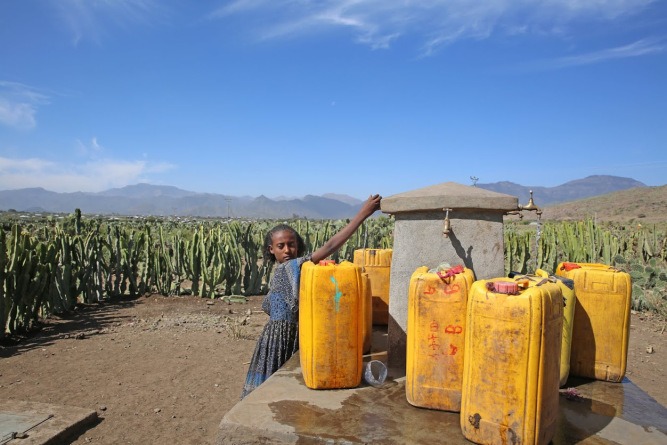 ADDIS ABABA (HAN) May 4, 2015 – Public Diplomacy, Regional humanitarian Security News. Today, we’re celebrating something special in Ethiopia – reaching the water Goal 7c of the Millennium Development Goals (MDGs). What does this mean? Put simply, it means 57 percent of the country’s population now is drinking water from an improved water supply such as a tap or hand pump, rather than from an open stream. By drinking water from an improved water supply, Ethiopia has greatly improved the health of many women and children and has managed to cut under 5 child mortality by two-thirds and significantly reduce child stunting.

And why is it such a big achievement? Well in the base year of the MDGs (1990), only 6.9 million Ethiopians used an improved water supply. However, in the last 25 years, Ethiopia has managed to supply water to 55 million people, which is twice, or even thrice the population of most other African countries.

The key to Ethiopia’s success during these years has been a combination of strong government leadership, persistent donor investment and the development of strong periodic policy instruments. In the year 2000, Ethiopia developed a Water Sector Strategy and Water Sector Development Programme, which paved the way for the progress. Government committed funds to the water supply sector and encouraged donors to invest in lower cost technologies to boost coverage levels. A total of US$ 2 billion has been invested by the Government, development partners, NGOs and the private sector in water supply since 1990.

Over the last 25 years, UNICEF has “concept proofed” a number of key innovations that have helped the Government of Ethiopia and its development partners reach the goal of MDG 7c. These have included the introduction of India-made hand pumps; importation of deep-well drilling machines from the UK; and more recently the exploration of high-end scientific remote sensing technologies to identify extremely deep groundwater in water insecure districts, followed by the building piped water supplies which interconnect towns and villages and benefit women, children, households, institutions, small-scale agriculture and livestock.

Such innovations help mitigate the potential impact of water and food insecurity and reduce the drivers of undernutrition and stunting. A good example of this is the Ebo multi-village scheme built and commissioned with UNICEF support in the Tigray region between 2013 and 2015. The Ebo village scheme is a long term solution in water-stressed areas of the country that have been prone to drought and have been reliant on emergency water trucking as their sole means of water supply.

The UNICEF Ethiopia Water, Sanitation and Hygiene (WASH) programme is UNICEF’s largest WASH programme in the world. UNICEF has provided technical leadership to not only build water supplies for 10 million Ethiopians in villages, towns and cities but also advised the government on the development of all the key WASH policy decisions over the last 25 years. Since 1990, the MDG baseline, UNICEF has contributed over US$ 300 million from its core resources and in partnership with other key donors to ensure that Ethiopian women and children received life-saving water and sanitation support in both emergency and non-emergency situations.

Going forward, Ethiopia has developed a ONEWASH programme to ensure that all the remaining people in the country receive access to water supply by 2020. The plan has a budget of US$ 2.4 billion and involves the collective contribution of public, private, NGO and donor investments. It will involve the scaling up of innovative interventions such as Ebo to ensure resilient water supplies in remote, water scarce areas of the country. UNICEF will focus on ensuring that the hardest to reach populations and water-scarce and emerging unplanned urban settlements are a priority for water supply investment, so that no child is left behind and unable to access safe and clean water. UNICEF Ethiopia