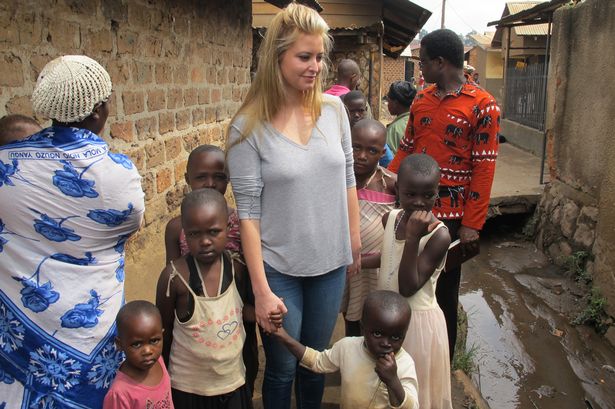 When my daughter Luka is unwell I think “right, let’s go off to the ­doctor”. It’s the first thing we do in the UK because we have that luxury.

In Uganda, I met a woman who strapped her baby on her back and walked for hours to get tested to see if the fever her child had was malaria.

The clinic is pretty simple. A tiny plastic device can diagnose malaria and then you can treat it. Those simple tests are making huge differences and helping many, many people.

The woman was a single mum. She made the difficult decision to leave her other children at home to get her daughter tested.

The baby, as usual when kids have a tiny injection, did a bit of a cry for 15 seconds and then you distract them and it’s all over. We sat with the alarm clock and waited 15 minutes to see what the results were.

I was sitting there, very stressed, with my fingers crossed tightly behind my back hoping it was not going to be malaria. And it wasn’t, which was great. It was a nice result to have in front of us.

But for a lot of people it’s going to be malaria and by doing this test they’re going to have an answer and then be able to access the drugs they need.

If I couldn’t get Luka to the doctor when she was unwell… well, it’s unthinkable.

The frightening thing is ­children are still dying from malaria. But there are people out there making changes and making a huge impact.

My brain was so busy taking it all in, trying to compute all this work that the Malaria Consortium is doing with Comic Relief and GSK funding.

These children are obviously adored by their mums and ­families and if they had the means to make things better for them they would. But it’s not an ideal situation.

I remember bursting into tears when I was on tour as the fact that so many people live such tough lives really got to me.

My tour manager said I had to drop that thought. Either do something about it or stop ­thinking about it.

So I’m doing something about it. I’m ­highlighting the work Comic Relief is helping to fund, ­particularly to protect children, this World Malaria Day and I’m also ambassador for two children’s charities.

Children are the answer for generations to come and I want to teach Luka that she has to help people.

She’s a really thoughtful little kind human being already who checks on everyone and puts her hand on your shoulder and asks “are you ok mum, you ok?” I think I won’t really have to teach her much, she’ll probably teach me.

Of course, I was missing Luka the entire time we were in Uganda.

We had a lot of rain while we were there. We thought it was just simply a big, ginormous storm, but actually it meant that in about a month’s time there’s going to be a lot of malaria because the water that has flooded where people live is going to be teeming with mosquitos.

So, in a few months there’s going to be a lot of very, very sick children around.

When it rains in the UK I just moan like everyone else and then go about my day. I don’t have to think about the shocking consequences – 70% of people that pass away from malaria are under five.

It’s just ridiculous in this day and age.

But with the help of Comic Relief money, the project is ­making some major changes.

We went to a town meeting in a village where they were ­educating people about how to recognise malaria symptoms, how a diagnostic test works and the importance of passing this information on.

Sleeping under insecticide treated nets halves the chance of kids catching malaria. What a dent in such a massive problem.

But there’s still a long way to go. Comic Relief and GSK ­working together makes sense.

It doubles effectiveness, ­doubles the people learning about it, knowing about it, it keeps that reach getting larger.

This is not something that’s going away right now.

Hopefully in many years’ time we can look back and say “hey, remember those days when people used to get malaria and they died, wasn’t that ridiculous”.

I hope we can say that at one point but we can’t right now. People are still dying.