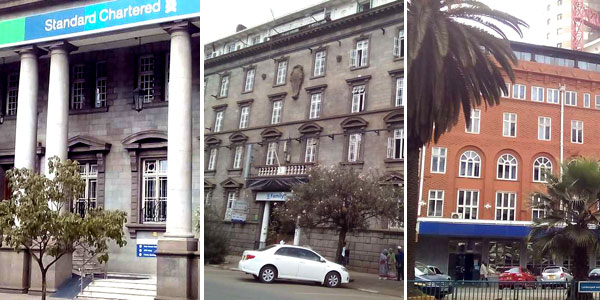 A walk through the streets of downtown Nairobi is like a journey through more than a century of history.

Some 130 years ago, Nairobi was a swampland called enkare nyirobi (place of cool waters) by the Maasai who came to water their livestock there. In 1899, the British colonial authorities set up a resupply station for the “Lunatic Express,” the Mombasa-Uganda Railway. It was the railroad that gave rise to Nairobi.

Kipande House, on Kenyatta Avenue and Loita Street, was built in 1913 as a railway warehouse because the trains line ran on Loita Street before the 1951 master plan.

Now a bank branch of KCB Group, the two-storey building, with its clock tower, was designed by Gurdit Singh. It was the tallest building in town until City Hall was constructed in 1935.

At Kipande House, during the colonial times, Africans were issued with identity cards, called kipande, which were used to monitor their movements. The kipande was inserted in a bronze pass holder worn around the neck like a cowbell.

The Old Provincial Commissioner’s Office at the corner of Kenyatta Avenue and Uhuru Highway is now the Nairobi Gallery. Originally built for the Ministry of Native Affairs in 1913, it was informally called the Hatches, Matches and Dispatches office because it was where births, marriages and deaths were registered.

Kenyatta Avenue, was first named Third Avenue then renamed Delamere Avenue after Lord Delamere, one of the wealthiest and most influential British settlers.

Growing trade because of the railway attracted new banks. The National Bank of India, opened in 1904, was the official bank for the railway project.

Standard Bank of South Africa opened its first Nairobi branch in 1911 and later became the Standard Chartered Bank, which is still housed in the same Roman-style building with a colonnaded entrance.

The adjacent building is Westminster House, a three-floor building with balustraded balconies that houses Ecobank. It was first built in 1928 as a hotel.

Next to Westminster is the Pan African House, today a branch of Family Bank. This Georgian-style building is constructed from Nairobi bluestone, like most other buildings of this period.

In the middle of Kenyatta Avenue is the Carrier Corps Memorial that commemorates African soldiers who served in World War I and II. Standing at the memorial you can see the McMillan Library behind the Bank of India, a single storey neoclassical structure with columns and lion statues. Named after the American philanthropist Sir William Northrup McMillan, who relocated to Kenya, it was established in 1931 to serve Europeans.

Colonial segregation extended even to the judicial administration. The Nairobi Law Courts were opened in 1935 to serve Europeans, while Asians and Africans had separate court systems.

The Kenya National Archives, built in 1931 as a double-storey neo-classic structure, was established in 1966 by Kenya’s second vice president, Joseph Murumbi, to store prized national records. Mr Murumbi was an avid collector of African art and artefacts, and a huge portion of his private collection is still housed at the Archives.

At the far end of Kenyatta Avenue is Nairobi’s first hotel, the Stanley Hotel, built in 1902 and named after the British explorer Henry Morton Stanley. The hotel burned down in 1905 and was rebuilt as the New Stanley Hotel in 1912.

Opposite the Stanley was the Torr’s Hotel, a red-brick building inspired by City Hall in Stockholm, Sweden. It was constructed in 1928 by the eccentric Ewart Grogan, best known for hiking from Cape to Cairo to impress the father of his sweetheart, Gertrude, after whom the Gertrude Children’s Hospital is named.

Torr’s was later sold to the Ottoman Bank of Turkey, then became the National and Grindlays Bank and now houses CfC Stanbic Bank. Neighbouring Torr’s is the Theatre Royal building of 1912, which became the Cameo Cinema and is now an office block.