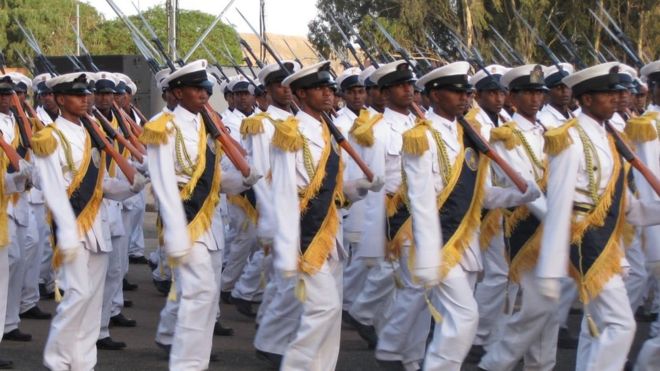 LONDON (HAN) June 8.2016. Public Diplomacy & Regional Security News. The migration crisis in Europe has thrust Eritrea under the spotlight. Last year, more people fled to Europe from this small, secretive nation than from any other African country. The BBC’s Mary Harper has gained rare access.

One of the first people I meet in Eritrea is a young woman who tells me she has never visited her country before.

Her family fled during the 30-year war for independence from Ethiopia.

She was born in a refugee camp in Sudan and her family was later granted asylum in the US.

“I decided to come here to stay.

“I work in a hospital. The Eritrea I am living in is not the one I hear about in the news.”

Over cappuccinos and delicately-iced cakes in the pavement cafes of the capital, Asmara, I meet a few others like her – highly educated Eritreans who have chosen to return from abroad to live and work, both in government institutions and private businesses.

I am free to speak to whoever I want and there are no government minders with me.

Some older people have come to retire.

I visit one old man in an elegant villa, splashed with the pinks and purples of bougainvillea flowers, in what was the “European quarter” of Asmara during Italian colonial days.

An elderly woman, who used to live in Germany, lives in a far simpler home.

Like many Eritreans, she enjoys evening strolls along the city’s wide avenues, lined with date palms.

Thousands of others come to Eritrea for their holidays. They are known as “summer butterflies”.

This is not what I was expecting.

Human rights groups, the Eritrean opposition and media reports often portray Eritrea as a terrifying place that everybody wants to run away from, that is fast becoming empty of its youth.

Not everything is straightforward for those who come and go. Rights groups say a 2% “diaspora tax” is a way of controlling Eritreans who live abroad. They say only those who pay are given visas and access to other consular services.

Members of the diaspora have foreign passports so they can leave when they want.

People with Eritrean passports cannot leave legally without an exit visa, which is difficult to obtain. Plenty are going illegally, crossing the border and risking their lives in the Sahara Desert and Mediterranean Sea before they reach Europe.

Such reports have helped Eritreans obtain almost automatic asylum in many European countries, although there are moves to make this more difficult.

Eritreans on the move

Source: Frontex: (European Agency for the Management of Operational Cooperation at the External Borders of the Member States of the European Union)

A United Nations-appointed Commission of Inquiry says that “some of these violations may constitute crimes against humanity”.

The allegations are denied by the Eritrean government, and described as “laughable” by its Head of Political Affairs, Yemane Gebreab.

“There is no basis to the claims. Everyone who knows anything about Eritrea, including European governments, will tell you this is rubbish.”

Western and other diplomats based in Asmara tell me the Commission of Inquiry’s report is “unhelpful” and does not reflect accurately the current situation in Eritrea.

They say the country is authoritarian, but describe as “absurd” descriptions in the media and elsewhere of Eritrea as “Africa’s North Korea”.

An international human rights worker I meet outside the country says an estimated 30% of people who claim to be Eritrean for asylum purposes actually come from Ethiopia.

I’m told others are Sudanese.

Some Ethiopians and Sudanese share languages, physical characteristics and cultures with Eritreans, and it is significantly easier to obtain asylum as an Eritrean.

In spice markets, on rugged, terraced hillsides and in orderly queues for red buses, I meet Eritreans who do want to leave.

Many say they feel trapped in national service, which they have to enter once they have completed their education.

The majority are given civilian duties, such as teaching or working in a ministry.

They say they have little or no choice as to what role they are assigned or to which part of the country they are sent.

The worst part, they say, is that they have no idea for how long they will be in national service.

Officials tell me national service is essential because Eritrea is in a state of “no war, no peace” with its giant neighbour, Ethiopia, against whom it fought an as yet unresolved border war from 1998-2000.

Others have different reasons for wanting to leave.

Many complain about the economy.

Some want to join family members or dream of furthering their education.

“I want to study engineering in the US,” says one woman.

Some seem attracted by the glossy images of the West they see on the dozens of TV channels available.

Satellite dishes are like a disease in Eritrea; they are dotted on the roofs of houses in poor urban areas, on huts in villages.

I meet a group of young people who are determined to stay and push for reform from within.

“We need change and we will try to fight from the inside,” one tells me. “I want to be free”.

Another says: “We are afraid of our government. There are spies everywhere and we do not know who are they are.”

Others tell me they love Eritrea and want to help develop their 25-year-old country.

“Eritrea is criticised for having no democracy, no parliament, no constitution, no independent media,” says one young man in a late-night bar, as he sips local Asmara beer straight from the brown, thick-glassed bottle.

“But what is the point of elections in Africa? They lead to ethnic divisions and violence.”

The State of Eritrea

Find out more about Eritrea

Many supplement the low pay of national service by doing other jobs.

Some only have to do their national service jobs in the afternoons, or for two days a week.

They spend the rest of time working in shops, as taxi drivers, for foreign embassies and privately-run factories.

The government is in the process of increasing the amount of money people receive when they are in service.

“We want young people to stay,” says Mr Yemane, “Eritrea does everything it can to create opportunities for them, such as free education.”

In a recent speech, President Isaias Afwerki said the West was deliberately trying to weaken Eritrea by encouraging the population to leave with its generous asylum policies.

Dressed in khaki, this tall, tough-looking man, with a big black bushy moustache, said the West was sabotaging the economy, “with the aim of creating poverty and starvation to instigate crisis”.

But now, after years of international isolation, Eritrea and the outside world are slowly opening up to each other.

Eritrea is making more friends in the Arab world.

This is partly because of the war in nearby Yemen, where a Saudi-led coalition is fighting Houthi rebels.

Eritrea’s Foreign Minister, Osman Saleh Mohammed, told me one member of the coalition, the United Arab Emirates, was using ‘”logistical facilities at the port and airport” in the southern city of Assab.

The migration crisis has also acted as a catalyst for closer engagement, this time with Europe. Eritrea does not want to lose its youth, and Europe would prefer them not to come knocking at its doors.