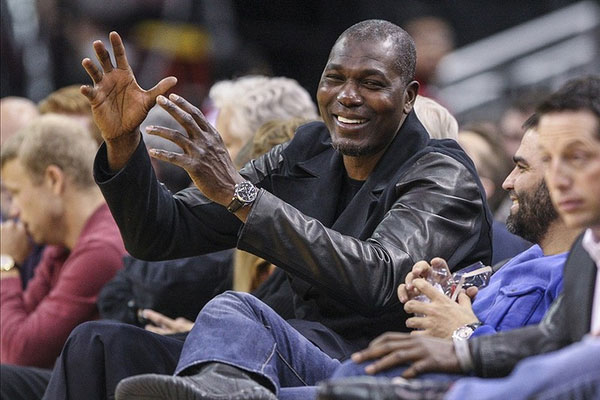 Share on Facebook
Tweet on Twitter
Addis Ababa (HAN) May 22, 2014. HAN Sports reporter, Jamal Abiib from African Union’s capital Addis Ababa, Ethiopia and Houston Chronicle By Jonathan Feigen  as the prospect of a new NBA players in Africa, specially diaspora layers originally come from Somalia, Ethiopia, Eritrea, Ghana, Senegal, Djibouti, Nigeria and South Africa… NBA Africa World powers looms on the horizon.
The American NBA legend Hakeem Olajuwon was named the NBA Ambassador to Africa this week, where he will play a prominent role in the development of basketball in Africa.
Just over three decades after Hakeem Olajuwon arrived at the University of Houston from Lagos, Nigeria, on a journey that would lead him to the Rockets and the Hall of Fame, his long assumed role as inspiration and exemplar to basketball players in Africa was made official on Wednesday.
He hoped, however, in his new role as NBA Ambassador to Africa he could do even more.
Olajuwon will work closely with the NBA Africa office in Johannesburg, South Africa, on player development and NBA Cares events, while hoping to bring a “positive” message needed amid the crises, especially in Nigeria.

“I see Africa as the future,” Olajuwon said. “I’m very happy for this position to help support (NBA Vice President for Development in Africa) Amadou (Gallo Fall) and the NBA on the ground with different organizations to create awareness and life skills through basketball, and also give a platform for players to develop their talents to play on a higher level from high school in the US, to colleges and ultimately for those that have tremendous talent to play in the NBA. Right now, it’s a true platform that can be created to channel their talent.
“High school coaches and college coaches are looking for talent … on a global level. They look to Africa because there is tremendous talent and opportunity in Africa.”

More than 30 African players have played in the NBA since Olajuwon began his Hall of Fame career, but there has long been a sense that there is much more talent that could be developed. Olajuwon said the key to that could be create relationships in Africa to allow the clinics and other training necessary. Olajuwon said he was not sure whether he would participate in actual events, but indicated that his role could be to help make them possible.
“A lot of players with dreams have been influenced by me and other African players that have played in the league, but I think the natural step now … is to expand in US and China and also in Africa because there is opportunity and talent,” Olajuwon said. “There also opportunity for big corporations to bridge the gap between the NBA and the government to provide opportunity for players to develop basketball in Africa.
“I was in Nigeria with the NBA and the program called Power Forward. I was in the ground with the government officials and also with actual players, the kids, taking pictures, shaking hands, meeting a lot of people. I will be on the ground working with Amadou, who is in charge, to see where my role can make the most impact.”
For Olajuwon, the position with NBA Africa is a chance to offer a response, even if only a symbolic answer, to the anguish in Nigeria with the continuing acts of terrorism by Boko Haram.
“I think the timing is right to bring that positive image,” said Olajuwon, who worked with the Rockets and Dwight Howard last season. “What is going on in Nigeria is very, very difficult for anyone to comprehend. The mindset, it is mind-boggling. I look for positive things to counter the negative of the mentality that is going on now in Nigeria.
“This is the advantage of sports. Sports are something everybody can gather over regardless of their differences to be able to give back to the community and the youth of the future.”
The latest updates Follow twitter.com/GeskaAfrika
Geeska Afrika Online (1985 -2014) – The International Gateway news and views about the Horn of Africa (Ethiopia, Eritrea, Somalia, Somaliland, Sudan, South Sudan, Djibouti, Kenya and Uganda), the best IGAD news and information Online Site for the last 20 Years.
–
HAN & Geeska Afrika Online (1985-2014), the oldest free independent Free Press in the region, brings together top journalists from across the Horn of Africa. Including Ethiopia, Somalia, Eritrea, Sudan, Djibouti, South Sudan, Uganda, Kenya, Oromo, Amhara, Somali, Afar and Harari. Plus, we have daily translations from 150 major news organizations in the Middle East and East African regions. Contact at news@geeskaafrika.com