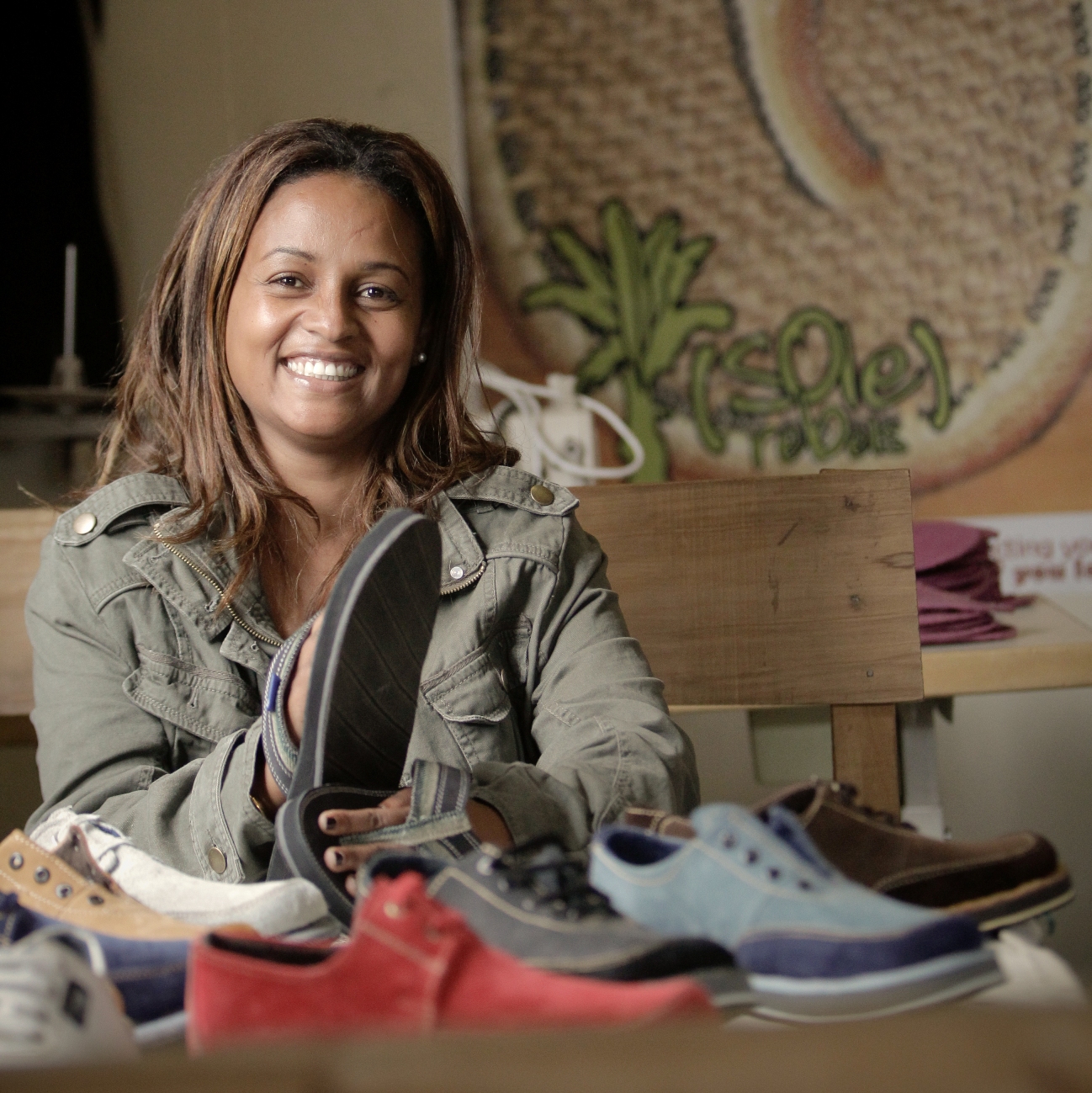 On a warm weekday afternoon, trade is quiet – but soleRebels footwear is gaining in popularity, staff say. Fans include locals in their 30s, elderly people who find the shoes comfortable yet attractive, parents with adopted Ethiopian children and Germans living in the city.

The shop opened three years ago, and is one of 20 stores worldwide selling distinctive shoes made from recycled tyres, leather from free-range animals and cloth hand-woven by Ethiopian artisans in the poor community of Zenabwork/Total, a suburb of the capital Addis Ababa.

“It is not footwear we are producing – it’s a kind of art,” explained Bethlehem Tilahun Alemu, who founded soleRebels in 2005 in the neighbourhood where she grew up, after realising skilled residents lacked job opportunities.

“For people to be innovative… they don’t have to really travel a long way or copy somebody’s business idea. It’s right there,” she told the Thomson Reuters Foundation.

The entrepreneur in her mid-30s is no fan of foreign aid, which she says has not helped her community. She prefers to see people improve their own situation through dignified work with decent pay.

At soleRebels, which employs around 420 people, workers on average earn four to five times the Ethiopian minimum wage, according to the brand’s website. It is the only footwear company to be certified by the World Fair Trade Organization, the site notes.

“What I want to see happen is that, in my company, people who are coming to work are able to go to school, are able to support their family, are able to live the life they wanted,” Bethlehem said in a phone interview from Copenhagen, where she was speaking at the Global Green Growth Forum this week.

Her aim has been to turn Ethiopian tradition into an international green brand – a challenge she has risen to with energy and enthusiasm, setting up an online shop and soleRebels stores from Taiwan to Silicon Valley and Greece.

This fiscal year, the company expects revenue of $10 million to $12 million. It says it is on track to become the first global retail chain from a developing nation to open 100 stores, and achieve over $200 million in revenues by 2019.

Yet despite her ambition, Bethlehem – who has won several international business awards and is a World Economic Forum Young Global Leader – isn’t focused primarily on profits.

In her eyes, the value of her business lies in bringing Ethiopian craftsmanship to the international market in a way that preserves culture, benefits local people and protects the environment.

“There is no carbon footprint in our product,” said Bethlehem, noting that the shoes are crafted entirely by hand, with each pair touched by some 30 workers.

Shipping overseas produces some climate-changing emissions, but packaging is made from recycled cartons and the shoes are sold in hand-loomed cotton bags.

The company says it also comes close to its goal of zero waste, using as many recycled materials as it can. That begins with the old tyres cut up to make shoe soles, a technique used for decades in Ethiopia’s “selate” and “barabasso” shoes, said to have been worn by rebels fighting for independence.

The Ethiopian government has put in place policies and regulations to meet its goal of becoming a middle-income, carbon-neutral country by 2025, Bethlehem said.

For example, it is setting up green industrial parks powered by renewable energy, while factories are treating water and waste, she added.

But ethical companies like hers remain a niche business, she admitted, and the task now is to influence young Ethiopian entrepreneurs to adopt a similar model.

“If I put up a sustainable way of working, a sustainable lifestyle brand, then people will aspire to follow that lead,” she said, noting the need to create jobs in a populous country with many young people.

The majority of Ethiopians still have a lot to learn about the impacts of climate change and how to fight it, but awareness is building among the expanding middle class in cities like Addis Ababa, Bethlehem said. It’s something she has witnessed in the rising number of local people visiting her stores there.

The Horn of Africa country is at a “very exciting time” in its development, she said. But it is also a “scary time” as the country determines whether it can achieve a more sustainable model of development than rich industrialised nations whose past pollution is largely responsible for heating up the planet.

One barrier may be finding investors prepared to put money into ethical African companies on a scale large enough to make a fundamental economic difference.

“When it comes to… investments in Ethiopia, they don’t choose my way of working because it’s not fast, the profit margin is small, and the way it grows – with awareness – takes time,” Bethlehem said.

But the businesswoman, who is also expanding into luxury leather wear, coffee and consulting services, remains optimistic that the soleRebels ethos of training workers and paying them well can help beat poverty in a country where more than 10 million need food aid amid a severe drought.

“If we duplicate this way of working… I think there will be the possibility to support a lot of people,” she said. “We are just starting.”