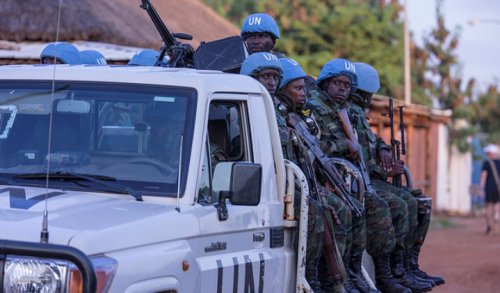 JUBA South Sudanese government and the rebel SPLM-IO welcomed dismissal of the force commander of the United Nations Mission in South Sudan (UNMISS) for failing to protect civilians.

On Tuesday, UN Secretary General, Ban Ki Moon, announced in New York that he had fired UN Force Commander in South Sudan, Lieutenant General Johnson Mogoa Kimani Ondieki of the Republic of Kenya for failing to protect civilians during the recent upsurge of violence in the capital, Juba.

The UN chief took the action after receiving official internal report within the UN system which investigated the underperformance of the UN force under the command of General Kimani.

Cabinet Affairs minister Martin Elia Lomoro told reporters on Wednesday that the government welcomed the decision of the United Nations to replace the force commander of its mission in the country.

“As the government we welcome the decision by the UN Secretary General. UNMISS did not do much and this decision will tell the world that yes this has proven that UNMISS has failed to do what it is supposed to do,” said Minister Lomoro, referring to Juba initial refusal to increase the mission’s troops.

He said the government will continue to work and cooperate with the United Nations in building confidence. “We hope that they can now bring a commander who will be cooperative and understanding in order to rebuild the confidence that has lost between the UNMISS and government of South Sudan.”

The UN report which was revealed on Tuesday after investigation into the conduct of the peacekeepers following the 8 July violence in Juba indicated lack of leadership on the part of senior UN officials, which the report said “culminated in a chaotic and ineffective response to the violence.”

“The Mission’s established culture of reporting and acting in silos inhibited effective action during a period in which swift, joint action was essential,” emphasized the report.

It accused both government and opposition forces of firing indiscriminately into the UN camps which were sheltering nearly 30,000 civilians in the capital.

The armed opposition faction of the Sudan People’s Liberation Movement (SPLM-IO) led by Machar said they welcomed the removal of the inactive commander of the peacekeepers in the country.

“We welcome the change in the UNMISS Force Command in South Sudan. The peacekeepers failed to protect civilians during the crisis right in the capital, Juba, and in other parts of the country, more notably also in Malakal. We hope that a new Force Commander will be appointed soon who will be more responsive and take actions to protect the civilians at risk in exercising their mandate,” Machar’s spokesperson, James Gatdet Dak, said in a press statement released on Tuesday night.

“We commend the action taken by the United Nations Secretary General, which we believe will contribute to confidence building among the vulnerable populations in South Sudan,” he added.

The investigation committee accused the UN peacekeepers of failing to respond to protect or rescue internally displaced women who were being raped near the UN compound by soldiers loyal to President Kiir. According to the report, the blue helmets also failed to rescue foreign women, mainly Americans, who were raped in Terrain Hotel, just a few blocks from the UN base, where killings of civilians by government troops also took place.

The fired Kenyan General Kimani previously served as Deputy Army Chief of Staff-Command and Control of Kenya Army Forces since 2013. He was also General Officer Commanding Western Command, Kenya Army, from 2012 to 2013, and Land Forces Component Commander of the Kenya Defence Forces in Operations from 2011 to 2012.

In addition, he held the position of Sector Commander-United Nations Mission in Sudan from 2010 to 2011.