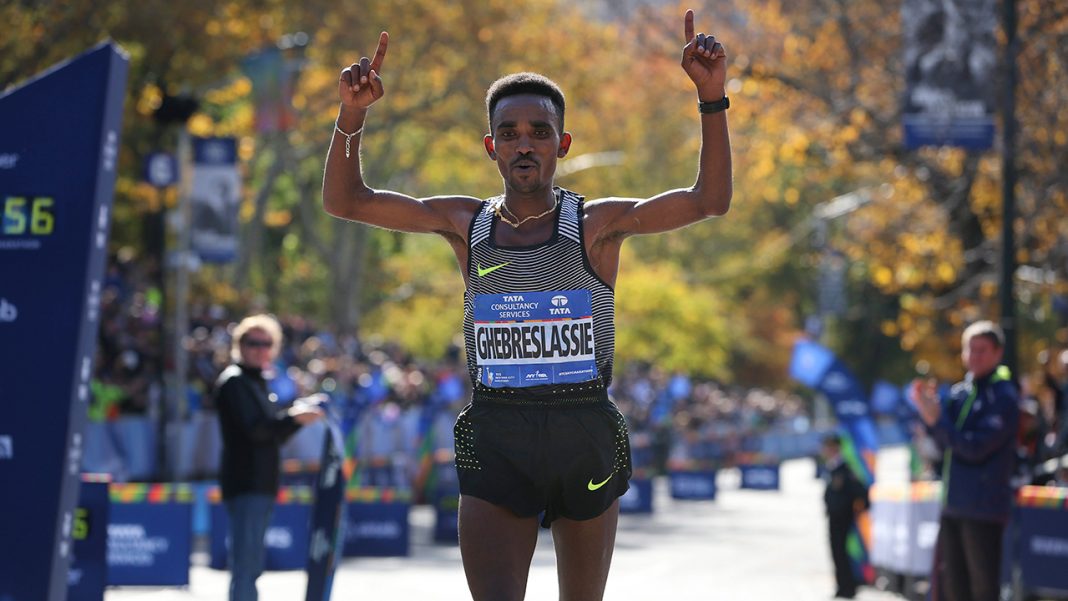 The 20-year-old Ghebreslassie won the men’s race in two hours, seven minutes and 51 seconds, more than a minute ahead of Kenyan Lucas Rotich.

Ghebreslassie’s victory ended a string of four victories in a row by Kenyan men in the race and denied the African nation a fourth consecutive sweep of New York men’s and women’s titles.

“I am really proud with my victory today to be the first one from my country,” said Ghebreslassie. “Nobody before from Eritrea won in the major marathons.”

Fourth in both this year’s London Marathon and the Rio Olympics, New York’s youngest ever winner joined Rotich and Ethiopian Lelisa Desisa in breaking away from a crowded pack at about the 22km mark.

By 35km Ghebreslassie held a 20 second lead over Rotich and was never threatened.

Defending champion Stanley Biwott, suffering from calf problems, was never a factor and dropped out before 15km.

American Dathan Ritzenhein, among the early leaders, also failed to finish, pulling out at mile 19.

Keitany became the first woman to win the race three consecutive times since eight-time winner Grete Waitz’s streak of five in a row ended in 1986.

“Winning three times means a lot to me,” said Keitany. “It’s not easy but I got it.”

She joined Waitz and Britain’s Paul Radcliffe as the only women to win the race at least three times. Radcliffe’s titles came in 2004, 2007-8.

Only fellow Kenyan Joyce Chepkirui was in contention after 20km and Keitany, who surprisingly was not picked for Kenya’s Rio Olympic team, pulled steadily away.

Compatriot Sally Kipyego took second in 2:28.01 and U.S. Olympian Molly Huddle made her marathon debut in an impressive 2:28:13 for third.

The victory was the fifth overall in the race and 17th major marathon win for McFadden, who defeated Swiss Manuela Schar by more than a minute.

Hug, who was running his sixth marathon of the year, was given the win in 1:35:49. He also won in 2013. (Reporting by Gene Cherry in Salvo, North Carolina, editing by Pritha Sarkar)