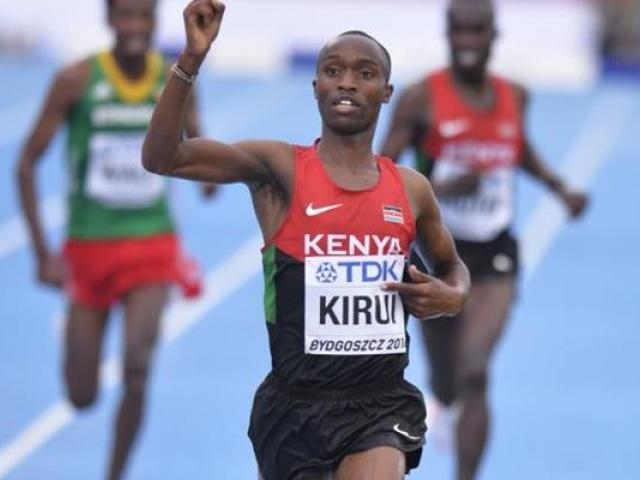 Amos Kirui kept Kenya’s perfect U20 World Championships streak in the 3000m Steeplechase alive for the 15th* consecutive edition, but his victory didn’t come until after one of the week’s most ferociously entertaining contests on the track.

As expected, he and teammate Vincent Kipyegon Ruto, the reigning world U18 champion, controlled the pace for most of the race, taking turns with the lead for the first two kilometres, Kirui bringing the field through the first 1000 metres in 2:51.39 and Ruto through 2000 metres in 5:35.00.

With three laps remaining, was essentially a four-man race for the medals, with Ethiopian Getnet Wale and Eritrean Yemane Haileselassie joining the Kenyan pair in the hunt.

Shadowing the pair closest, Wale looked to be in strong position to make his move over the final lap – until he reached the water jump on the penultimate lap. Coming off the barrier, he slipped and tumbled as he tried to leave the water pit, seemingly tripping his way out of contention.

While he recovered, Haileselassie moved past him and into third, off on a solo chase of the Kenyan duo.


But Wale wasn’t finished. He quickly made up ground, fighting his way back into contact with the leaders as they approached the last bend for the final time. Momentum appeared to be on his side as they approached the water jump where Wale, just about the pass Ruto, fell once again in nearly the identical spot.

At this point Kirui pulled away unchallenged to win in 8:20.43, with Haileselassie and Ruto giving chase. But some 25 metres from the finish, the pursuers for the minor medals found themselves yet again joined by Wale. In a rough and tumble battle at the line, Haileselassie got the upper hand for silver with Wale, diving across the line in front of Ruto to take the bronze. Haileselassie clocked 8:22.67 and Wale a personal best 8:22.83, a scant 0.01 ahead of Ruto.

“It was a stunning victory,” said Kirui, whose previous best was 8:37.4. “I wanted to fight for the championships record. Now I want to focus on fighting for a place in the Diamond League.”

Haileselassie, who was the fastest U20 runner in the Bydgoszcz field at 3:22.52, was also pleased.

“I expected to fight for a medal here,” the 18-year-old said. “It was a close finish, but I know I should never give up.”

Neither did Wale, but he paid for his efforts. For several minutes after he dove across the line, he barely moved. Eventually he was roused, lifted from the track and driven away on a stretcher. He missed the medal ceremony while he was attended to by medics, but was not transported to a hospital.

Further back Yohanes Chiappinelli was fifth in 8:32.66, a national U20 record for Italy.

Bob Ramsak for the IAAF