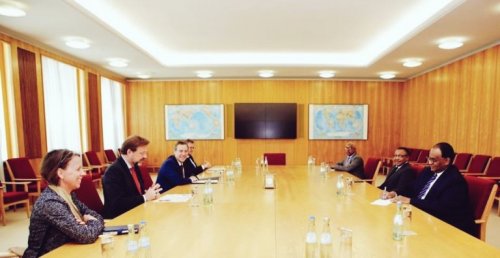 The donor pledged $1.8 billion to support the transitional government in Khartoum in the implementation of its economic reforms to reintegrate the international financial system.

In a statement released on Saturday, the official news agency reported that Gamar Eldin met with Martin Jaeger State Secretary at the German Federal Ministry for Economic Cooperation and Development.

“The meeting reviewed the progress of implementing the outcomes of the Berlin Conference in accordance with the mechanisms agreed upon at the conference,” said the agency.

For his part, Jaeger affirmed that his country will continue to support Sudan politically and economically, to ensure the success of the transitional period and to overcome the challenges facing Sudan, said the agency.

In a tweet posted after the meeting, Berger expressed his pleasure to meet the visiting Sudanese top diplomat.

“Your work on building a democratic and peaceful Sudan in spite of the huge economic and social challenges is admirable,” he said.

The Sudanese government is facing tough economic challenges and count on the EU support for the country.

Last February German Chancellor Merkel voiced her support to the Sudanese transitional government and pledged to back it economically.

“You need partners. Germany wants to be such a partner,” the chancellor said.“We want to do everything possible to use this historic window of opportunity. We want to support Sudan with everything that we can together with our partners,” she further emphasized. Suand News (ST)