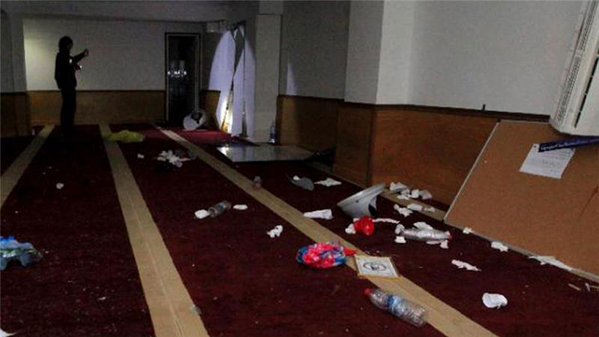 CORSICA (HAN) December 27, 2015 – Public Diplomacy and Regional Stability Initiatives News. A crowd vandalised a Muslim prayer hall and set fire to copies of the Quran on the French island of Corsica, police said, in an attack condemned by the government. The violence came on Friday amid heightened security measures for the Christmas holiday, and nationwide fears after the November 13 attacks in Paris killed 130 people.

French Prime Minister Manuel Valls wrote on Twitter that the break-in in the city of Ajaccio was “an unacceptable desecration”. Tensions had mounted in Ajaccio on Friday after two firefighters and a police officer were injured overnight in a low-income neighbourhood of the city when they were “ambushed” by “several hooded youths”, authorities said.

On Friday afternoon around 150 people had gathered in front of the prefecture in a show of support for the police and firefighters, officials said in a statement. But some in that crowd broke away and headed for the low-income housing estate where the violence took place the night before. They shouted slogans in Corsican meaning “Arabs get out!” and “This is our home!”, an AFP correspondent reported.

Nearby, a small group smashed the glass door to the mosque, ransacked the prayer hall and partially burned books including copies of the Quran, said regional official Francois Lalanne. “Fifty prayer books were thrown out on the street,” Lalanne said, adding that some of the pages were burnt.

The French Council of the Muslim Faith denounced the violence and pointed to the timing of the attack on Friday “on a day of prayer for both Muslims and Christians”. This year Christmas falls just after the Muslim feast day commemorating the birth of the Prophet Muhammad. French Interior Minister Bernard Cazeneuve said the attack showed signs of “racism and xenophobia”. He also condemned the assault on law enforcement and safety officers in Corsica.

Corsica is a department of France which held regional elections earlier this month in which the far-right, anti-immigrant National Front made unprecedented gains in the first round of the vote. On Corsica, nationalists won the regional election there, taking power for the first time. Source: aljazera