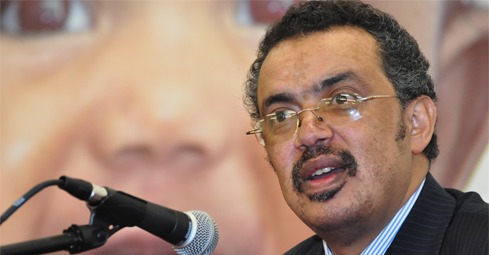 Addis Ababa October 16, 2015. Public Diplomacy and Regional Security Initiatives New – Foreign Minister Dr. Tedros met an EU Delegation led by Ambassador Walter Stevens on Friday (October 16).  Ambassador Walter Stevens said that Ethiopia was a key strategic partner in the region for the European Union and the soon to-be-celebrated 40th anniversary of links between the two was one example of the strong cooperation between them. He said that the synergy and cooperation between the EU and Ethiopia
was going well to the extent that the threshold of aid had reached a billion dollars.

He noted that Europe at the moment was confronted problems related to migration with numbers reaching over 600,000. He said that Ethiopia was a strategic partner for many reasons but migration was one not least because it was the largest tra
nsit and destination of migrants in the region and in the continent; and it currently hosted over 700,000 refugees. Commending Ethiopia’s efforts, he added, “We are here to seek advice from the countries in the region, especially over South Sudan, Somalia and Eritrea.” Dr. Tedros appreciated the strong interest the EU is showing towards the problems of Africa and Europe and the importance of seeking a common approach to common challenges. He mentioned Ethiopia’s substantial record of job creating and on strengthening micro-finances and smallholder farmers. He told the delegation that “our problems are your problems and your problems are also our problems.” He said Ethiopia was vigorously working to identify the root causes of migration and was drawing up tough legislation on illegal trafficking. It was also working on a major awareness-creation project with the National Theater of Ethiopia. On South Sudan, Dr. Tedros noted that positive changes were taking place following the signing of the peace agreement by President Kiir, although some skirmishes had continued here and there. These developments were taking place, the Minister said, because IGAD, the EU, the UN, the US and other actors and the international community were acting together and speaking with the same voice. On Somalia, Dr. Tedros noted that after Ethiopian troops had become involved at the request of the Somali Government, many areas formerly occupied by Al-Shabaab had been liberated. However, military intervention, he said, was not enough. As soon as areas were liberated, there must be humanitarian assistance provided and stabilizing structures created. Building up the confidence and trust of the society towards the Government of Somalia was essential. The Minister said the National Army of Somalia needed financial and logistical support as well as military training assistance from the AU in a reasonable, low cost and coordinated manner. Dr. Tedros noted the problem of Eritrea and said the EU should reconsider being involved with a government that was still committed to regional destabilization. Dr. Tedros said that Prime Minister Hailemariam would attend next month’s La Valleta Conference aiming to build on existing cooperation processes between Europe and Africa, particularly the Rabat and Khartoum processes on migration and the EU-Africa Dialogue on Migration and Mobility. MFA