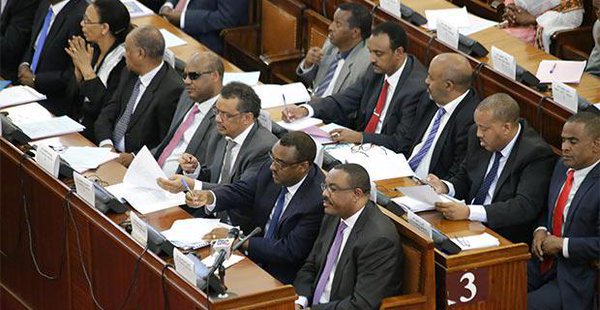 On Tuesday, the Premier presented a new cabinet to the parliament, entirely populated by the ruling party EPRDF (Ethiopian Peoples’ Revolutionary Democratic Front).

The Cabinet reshuffle has been promised after last September’s EPRDF leadership meeting. The party, chaired by Hailemariam Desalegn, pledged to undertake “deep reforms” to solve the root causes of the protests that engulfed much of the nation.

One of those fixes is the leadership reshuffle. Nonetheless, in the past two months, only one of the four member parties of EPRDF undertook party leadership change. That had dampened the public expectations.

However, somehow, Hailemariam managed to come with eye-catching changes at the federal government level.

As listed in the previous post (see: List of PM Hailemariam’s new Ministers), the ministerial appointees belong to six parties. Twenty-seven were nominated by the four parties that make up the EPRDF, while three are from EPRDF allied parties.

Here are seven points from the new ministerial appointments.

Out of the 30 ministerial appointees, only fifteen were members of the previous cabinet.

Among the fifteen, only nine ministers remained in their old posts. The other six are relocated to a different ministry.

2/ Which party kept its ministers?

Six of the eight ANDM ministers kept their job. Out of the six ANDM ministers that remained in the cabinet, five are still in their old post, while one relocated to a different ministry.

The biggest change was among OPDO ministers. All the eight OPDO ministers are new to their job. However, three were members of the cabinet in charge of a different ministry.

Both SEPDM and TPLF kept two ministers each in their old posts, while they brought four and two new faces to the cabinet, respectively.

The ruling party has been pledging in the past two months that it will bring new people regardless of party loyalty. That rhetoric by itself was a departure from the old party line.

In a bid to emphasis that perception, the Prime Minister left out the political background of the news appointees when presenting their CV to the parliament on Tuesday.

Granted, the new cabinet has less party officials than any cabinet in the past two decades.

Eleven appointees are not members of the EPRDF Council, though ten of them are party members.

One appointee, nominated by OPDO, is not even a member. That is, the new Minister of Water, Irrigation and Electricity, Sileshi Bekele (PhD) .

4/ EPRDF allied parties got a better deal this time.

The EPRDF allied regional parties often get relatively marginal ministries. But this time around, it appears their share has improved.

Out of the three ministries allotted for the Ethio-Somali and the Afar parties, two are important: The Ministry of Transport and Ministry of Construction, respectively.

One of the most interesting aspects of the new cabinet is the number of PhDs and academicians.

Out of the thirty ministers, twelve are PhD holders and two have professor affixed to their names.

It appears a move to impress the Ethiopian public which attaches too much value to titles.

EPRDF officials, whom HornAffairs spoke for explanations, didn’t deny that objective. They said, it confers the ministers public recognition and that’s good. They added, bringing academicians was deemed beneficial to expedite the institution building process. On top of that, they say, the new bunch would be less inclined to personal enrichment.

One wonders whether Prime Minister Hailemariam Desalegn, who served a decade in the academia, still abodes a secret admiration for that world.