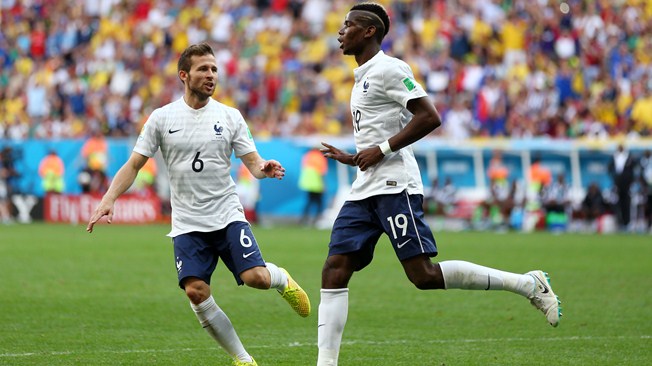 Sao Paulo (HAN) June 30, 2014- Geeska Afrika Online. France have marched through to the FIFA World Cup™ quarter-finals with a hard-fought 2-0 win over Nigeria in Brasilia. Didier Deschamps’ side were given a tough time of it by the African champions, but edged this tight encounter in the Estadio Nacional thanks to a Paul Pogba header and an injury-time own goal by Joseph Yobo.

The French started as firm favourites and it was they who created the game’s first noteworthy opportunity, when Giroud twisted into space only to slice his left-foot shot wide from 20 yards. However, it was Nigeria who looked the sharper and more purposeful side for much of the first half, and it wasn’t long before they were causing major problems at the other end.

The Super Eagles looked, in fact, to have taken the lead after 19 minutes when Emmanuel Emenike prodded into the net from Ahmed Musa’s inswinging right-footed cross. Nigerian celebrations were to prove short-lived, though, with Emenike having strayed narrowly offside.

For France, Pogba was among the most impressive performers throughout and the Juventus midfielder came close to breaking the deadlock midway through the half. Driving forward from midfield, he slipped the ball wide to Mathieu Valbuena and continued his run to volley powerfully towards goal when the cross arrived in the box. Vincent Enyeama, though, proved equal to the challenge, agilely palming the ball away for a corner.

Pogba was again involved in the final move of the half, when a clever reverse ball by Valbuena teed up Debuchy for a first-time shot. The ball looked sure to at least hit the target but the right-back proved wayward in his finishing and his shot flashed wide.

Nigeria remained the most dangerous side, though, and they very nearly took the lead eight minutes into the second half when Peter Odemwingie crashed in a left-foot shot from 20 yards that Hugo Lloris did well to parry clear. Closer still was Karim Benzema at the other end, who burst through on to a one-two with Antoine Griezmann and fired in a shot squirmed past Enyeama and looked to be trundling over the line. Victor Moses was Nigeria’s hero, though, racing back to volley clear just as a goal seemed likely.

It was a good spell for France, and they again came within a whisker of a breakthrough just a couple of minutes later when Yohan Cabaye’s 25-yard volley rebounded to safety off the underside of the crossbar. Pressure was building, though, and after Enyeama had saved brilliantly from a close-range Benzema header, an error from the same keeper handed Les Bleus the lead. Pogba was the man to profit, heading into an unguarded net with 11 minutes remaining after Enyeama had flapped unconvincingly at a floated Valbuena corner.

France rarely looked in danger thereafter, and they made sure of their place in the last eight – and a showdown with either Germany or Algeria – when Yobo diverted Valbuena’s low cross into his own net.