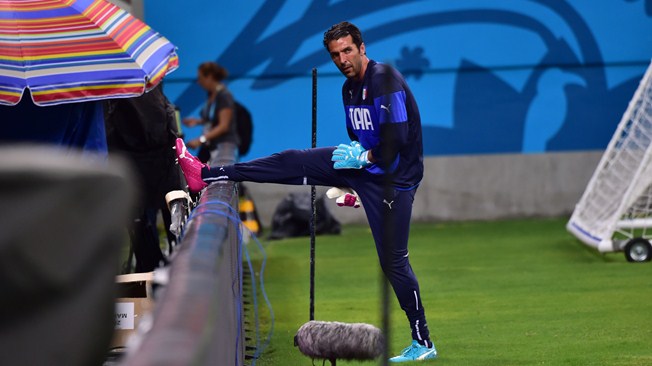 Sao Paulo (HAN) June 14, 2014- Geeska Afrika Online. Italy have a fitness worry over goalkeeper Gianluigi Buffon as they prepare to open their FIFA World Cup™ campaign against England on Saturday.

The Azzurri captain, a key member of the triumphant side of 2006, was absent from his scheduled appearance at the pre-match press conference at the Arena Amazonia.

AntonioCandreva instead sat alongside head coach Cesare Prandelli, who confirmed Buffon hadpicked up an ankle knock during training on the eve of the Group D clash.

“He twisted his ankle very lightly,” Prandelli said. “It was a very, very light ankle twist.

He isreceiving therapy at the moment, but it is nothing serious.” Any deterioration in Buffon’scondition would certainly be a big blow to an Italy side already with full-back Mattia deSciglio through injury.

Prandelli knowshas the ability to hurt them on the attack. “England have personality and psychologicalstrength,” he said. “They are very good at running, they are a fast team.

“The attackers have technical skills and are able to use the space available to them in thebest way, so we will have to be very careful and we will have to try to control the midfield.That is going to be the key.”

Prandelli, like England counterpart Roy Hodgson earlier on Friday evening, down play edissues surrounding the pitch in Manaus. “The turf that had been described to me was in avery bad condition, but it is actually in very good condition,” he said.

“It is not exceptional, but it is certainly good. As regards to the system of play I am going touse, it is always good to have a few lingering doubts on the night before because up untilthey very last minute the players must feel that they are still competing for a place on thesquad. We don’t want to give any competitive advantage to anybody.”