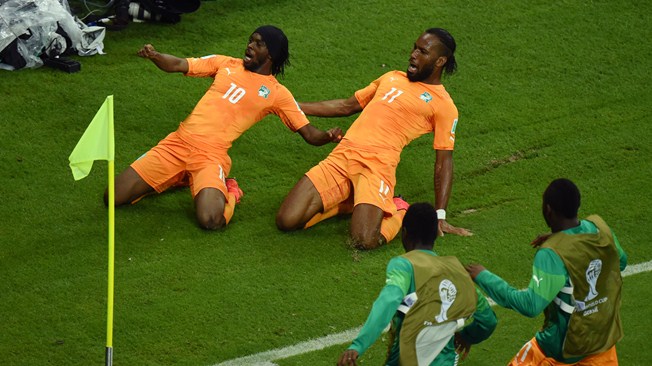 Japan’s crisp, incisive passing caused Côte d’Ivoire problems early in the match. And the European-based triangle of Shinji Kagawa, Kesiuke Honda and Shinji Okazaki carved out an opener after only 16 minutes. Okazaki forced a corner with his goal-bound header on the quarter-hour, and Honda was left unmarked at the edge of the penalty area. The kick was taken short and Kagawa laid the ball on for the AC Milan ace who took two touches, one to burst into the box and the other to fire home with his left foot.

Les Elephants, with the iconic Didier Drogba on the bench at the start, were dangerous from set-pieces and on the counter-attack. Captain Yaya Toure, just back from injury and perhaps not 100 per cent, fired his set-piece over from 25 yards in the 23rd minute and Arthur Boka did the same from the other side of the box on the half-hour. The Africans stepped up the pressure late in the half and Wilfried Bony fired off the post form a tight angle. Physically dominant, the Ivorian strikers put Japanese goalkeeper Eiji Kawashima through his paces as the opening period wore on. Côte d’Ivoire continued to hunt an equaliser early in the second half. Solomon Kalou threatened with runs inside from the left and the Japanese were forced further and further back into a defensive posture. Ivorian coach Sabri Lamouchi ratcheted up the pressure, too, by bringing on Drogba midway through the half.

The former Chelsea icon’s insertion made an immediate impact by stretching the Japanese defence. Bony moved into the fresh space and headed home a Serge Aurier cross from close-range in the 64th minute. Seconds later, another inch-perfect cross from Aurier picked out Gervinho racing forward, and the Roma man’s header also bulged the back of the net.

Two goals in two minutes and the Japanese drums fell silent. The Wounded Asian champions next face Greece up the coast in Natal on 19 June, the same day that Côte d’Ivoire take on group leaders Colombia inland in the capital Brasilia. FIFA