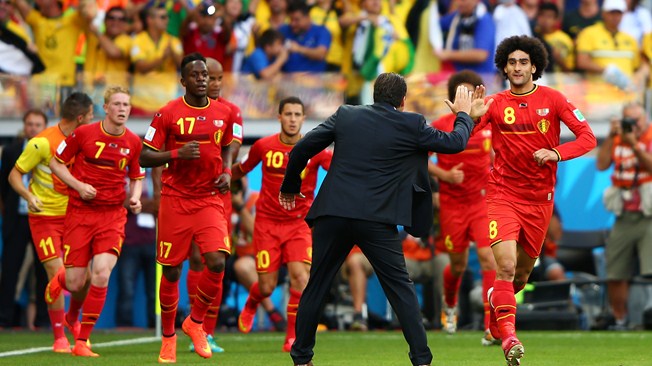 Sao Paulo (HAN) June 17, 2014- Geeska Afrika Online. It has not been an easy season for Marouane Fellaini. The burden of the big midfielder’s hefty £27 million transfer fee at Manchester United has proved tough to shoulder, and the campaign ended with him warming the Red Devils’ bench.

Yet although it was from this same position on the sidelines that he began Belgium’s FIFA World Cup™ opener against Algeria today, Fellaini was not downcast. For no matter how difficult the past few months have been, even the lowest moments never caused him to lose belief in his own ability. And when Belgium were struggling to break down a stubborn and well-organised defence in Belo Horizonte, Fellaini knew within himself that he could provide the solution.

“I always believe,” he told FIFA.com, “and I thought that, yes, if the coach gives me the call, I can help us win this match. One thing I know is that if my team-mates put crosses in the box for me, I can score goals. And you saw it today. Three times the ball came in for me and every time I won the header. I could have had a hat-trick.

“I’m just glad that one went in though because we were beginning to run out of time, and it was important we took one of our chances. In the end, I think we got what we deserved. We started very nervously and played badly in the first half. But I think you saw the character of this team in the second half. We just needed to stay calm, make the right decisions, and doing that got us this fantastic result.

“I’m really happy, both for myself and for the team. Scoring at a World Cup was a great moment for me and I immediately thought about my family, who always supported me through the years no matter what. Everything they did for me led to that moment.”

Fellaini’s superb 70th-minute header began a stirring comeback that was eventually capped in style by another of Marc Wilmots’ substitutes, Dries Mertens. And while some may question whether the Belgium coach erred in not starting with the players who did so much to alter the balance of the game, Wilmots did prove himself to be something of a prophet.

“I tend to focus just as much on those that aren’t playing [in the starting line-up],” he had told FIFA on the eve of the match, adding that “half our winning goals in the qualifiers were scored by substitutes”. Wilmots, therefore, would not have been surprised by the source of Belgium’s inspiration. And nor was Fellaini.

“Everyone can see that it was guys who came off the bench who made the difference today,” said the midfielder. “That’s always possible with this team anyway because you know that we have a lot of strength throughout the squad. It’s not just about the first 11 with us. And although it was me and the other two today, there are others who stayed on the bench who can be big and important players for Belgium at this World Cup.”

With one of Wilmots’ predictions having already rung true, Fellaini will now hope that another proves similarly accurate. After all, in the build-up to Brazil 2014, the Belgium coach assessed his midfielder’s travails and said simply: “The World Cup will be a good opportunity for him to take his revenge.”

Smiling at being reminded of those words, Fellaini said: “I hope he’s right. I’ve definitely been looking forward to this tournament. It’s my first World Cup and it’s amazing to be part of it all. Every player in the world wants to be here, so I appreciate this opportunity very much. I just want to make the most of it now.” So far, so good. FIFA