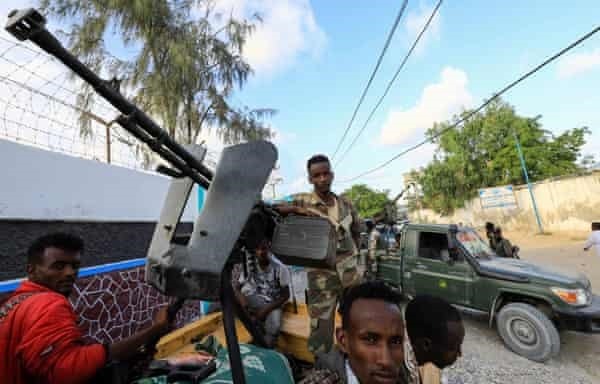 MOGADISHU (HAN) April 22. 2021. Public Diplomacy and Regional Stability Initiatives News. Monitoring Regional Issues. Tension are very high as increased military movements in Mogadishu over tonight. Abdirahman Abdishakuur said the Farmajo rebels were willing to negotiate with the Ethiopia and Eritrean governments to spare  further conflict in order to maintain 2 year extension endorsed by Farmajo and the lower house . “We do not want to start civil-war in Mogadishu, we will choose an independent Electoral Election committee which would be acceptable by all Somali Stakeholders and Somali people to facilitate credible elections. We want them to leave their positions without a fight. We do not want to hurt local Mogadishu civilians.”

Per very credible local journalist @golfyare , SNA units that have abandoned their posts in the critical Middle Shabelle region, bordering Banadir, have begun entering Mogadishu last few hours, with more on the way. These troops will reinforce opposition fighters in Mogadishu. Adam @adancabdulle

The Coalition movement in Mogadishu pulled off a stunning feat. Barely a month after their armed convoy roared across the east and western district of Mogadishu into northern zones, they are planning to kicked off a short battle to eliminate Farmajo’s militias, according to a senior former presidential aide.