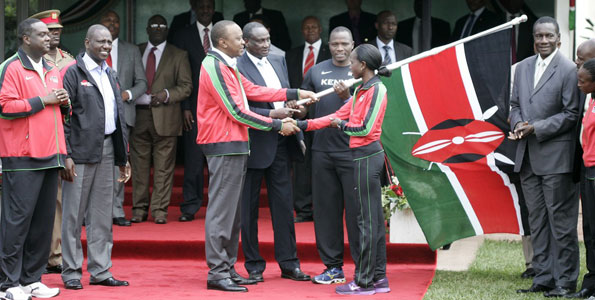 First, they have to prove their top medal standings at last year’s IAAF World Championships in Beijing were not a fluke. And, second, that such success is not catapulted by the Erythropoietin-injecting syringes of unscrupulous medics as claimed by the media.

In the past few months, an expose commissioned by The Times of London and German TV channel ARD, claimed it found evidence of “widespread doping” among Kenyan and European athletes at high altitude training camps in the North Rift region.

They claimed that some hospitals and pharmacies in Eldoret, Iten and Kapsabet were selling athletes banned performance enhancing substances such as the blood booster Erythropoietin, or EPO.

In the past few years, 42 Kenyan athletes have been banned for doping, the most prominent being former Boston Marathon champion Rita Jeptoo.

The increase in positive cases prompted the World Anti-Doping Agency (Wada) and the International Association of Athletics Federations (IAAF) to place Kenya on a doping watch list, later declaring the country “non-compliant.”

Subsequently, in an all-too-familiar, knee-jerk reaction, Kenya flexed its muscle by fast-tracking the Anti-Doping Bill through parliament after the government formed the Anti-Doping Agency of Kenya (Adak) to oversee testing of athletes.

But the government-heavy Adak failed to convince Wada of its independence and remains suspended, with Kenya missing an Olympic ban by a whisker.

Among the crusaders for the Anti-Doping Bill was Wesley Korir, the Cherang’any Member of Parliament, who is also in Kenya’s marathon team to the Rio Olympics.

He says Kenyan athletes have proved to the world before that they are champions and now it was time yet again to prove that they are free from doping.

“Besides proving we are champions, we are really determined to prove to the world that we are a bunch of clean athletes,” Korir said.

As the Games draw closer, the Kenyan contingent is at sixes and sevens, distracted by the happenings in court, where a leading manager and coach are both likely to miss the extravaganza owing to lawsuits.

Federico Rosa of Rosa Associati and coach Claudio Berardelli are both facing doping-related charges in the Nairobi courts. Between them, they have at least 12 of Kenya’s medal hopefuls in their stables.