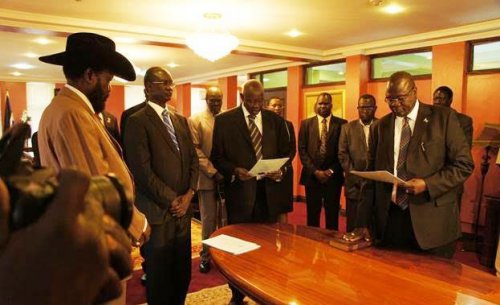 JUBA (HAN) April 19. 2016. Public Diplomacy & Regional Security News.  International experts with knowledge on South Sudan’s politics and governance systems have painted a gloomy picture about the future of the would-be formed transitional government of national unity in the world’s youngest nation, saying it will likely continue with the status quo.

Opposition leader, Riek Machar, is scheduled to arrive in Juba on Monday, the capital of South Sudan, an important step in the peace process to end the civil war that has claimed the lives of tens of thousands.

Machar is set to take up his post as first vice-president in the transitional government which he he expected to form with President Salva Kiir, who sacked him in July 2013 and chased him away from Juba, accusing him of planning a coup.

Experts at the Enough Project however said the new government involving the two political rivals at the helm will likely become confrontational in its functions and will make no positive impact on the welfare of the people of the nation.

“Machar’s return cannot hide the most insidious obstacle to lasting peace, which is entrenched competitive corruption. The violent kleptocracy that marks the world’s newest state is likely to fuel further competition between the formerly warring factions to capture state resources,’ said John Prendergast, Founding Director of the Enough Project in comments extended to Sudan Tribune.

He said forming a new unity government with the same actors responsible for the collapse of the economy and atrocities holds open the possibility that grand corruption will return to its pre-war patterns.

Local South Sudanese and international efforts to support accountability and transparency, he added, should be at the core of any peace promotion strategy going forward.

“Without an emphasis on consequences for gross corruption and atrocities, it’s unlikely the deadly patterns will be broken,” he warned.

Ian Schwab, Director of Advocacy at the Enough Project pointed out that South Sudan’s war has created major self-enrichment opportunities among the elites in the government, and therefore peace threatens to undo some of these patterns of corruption.

“The most difficult task facing the new transitional government will be how to effectively manage corruption and violence,” he said.

The international community, he added, can play a critical role in holding South Sudan’s leaders accountable to fulfil their commitments under the peace agreement.

Machar is expected to arrive in Juba on Monday to be sworn in as First Vice President upon arrival and form a transnational government with President Kiir few days after his return to the national capital.