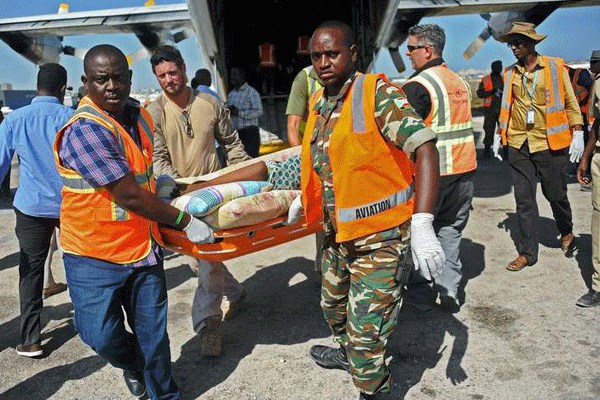 MOGADISHU(HAN) March 7, 2016. Public Diplomacy & Regional Security News. On a Sunday afternoon in late February, a car bomb exploded outside a crowded restaurant in Baidoa and moments later a suicide bomber blew himself up among fleeing survivors.At least 30 people died in the attack, the latest by Al-Shabaab, a Somali-based Al-Qaeda group that continues to defy predictions of its demise.

Two days before the Baidoa bombings, 14 people were killed when two bombs exploded outside a hotel in Mogadishu.

One was a 200kg homemade bomb, only the second time Al-Shabaab has used such a large device.

The first was in July and the explosion tore the side off a six-storey hotel.

Five weeks earlier, 19 were killed in a bomb and gun attack on a restaurant on Mogadishu’s Lido Beach.

It is not just civilians who are targeted.

On January 15, the fighters overran a military outpost in El-Adde, southern Somalia, manned by up to 200 Kenyan soldiers deployed as part of the African Union peace-enforcement mission, Amisom.

Kenya has refused to say how many soldiers were killed.

Matt Bryden, director of Sahan Research, a Nairobi-based think tank, described the first such attack, on a Burundian forward operating base in Lego last June, as a threshold operation.

Amisom’s effectiveness is hampered by suspicion and jealousy among main troop contributing countries and a lack of coordination, funds, focus and will.

It is also struggling to adapt to a rural counter-insurgency after its eventual success in urban combat pushed Al-Shabaab out of Mogadishu five years ago.

“Amisom is fighting the wrong war,” said Stig Jarle Hansen, a Norwegian academic and author of a forthcoming book on jihad in Africa.

“Troops watch their own backs, they are in their garrisons, they go out patrolling once a week and the rest of the week Al-Shabaab is on top of things,” he said, adding that by enforcing local support, Al-Shabaab can survive for 30 years.

The losses inflicted on Burundians in Lego, Ugandans in Janale and Kenyans in El-Adde have cowed Amisom, which has retreated from some areas.

“Since Amisom is not in an offensive posture, Al-Shabaab has plenty of space to think, plan and prepare,” said Bryden.

One of the first moves by Al-Shabaab leader Ahmed Diriye when he took over in 2014 was to reaffirm the group’s commitment to Al-Qaeda.

And, with a recent revolt by internal Islamic State agitators crushed, suggestions that Al-Shabaab might be collaborating with West Africa’s Boko Haram are implausible.

Under Diriye, the organisation has gained vigour and expanded its regional reach, confounding predictions of its end.

“This is a movement whose membership and horizons are broader than Somalia, and is operationally active in at least six countries,” said Bryden.

Al-Shabaab no longer administers large territories, but has adapted to the new circumstances becoming, “simultaneously weaker and more dangerous,” according to Ken Menkhaus, a professor at Davidson College in the US.

An Al-Shabaab commander was on Thursday sentenced to death in Mogadishu for killing a journalist but far from being defeated, the group appears reborn.