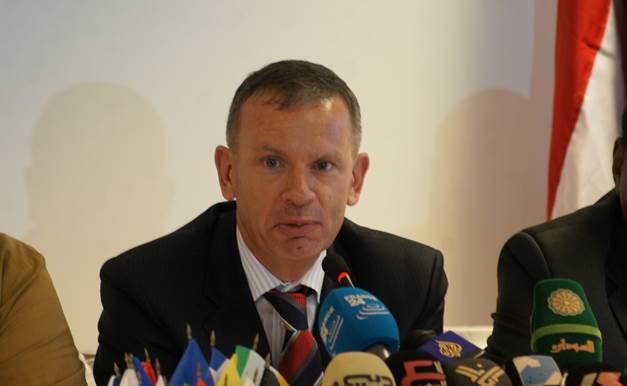 The ambassadors of the European Union, France, Germany, Italy, Netherlands, Sweden and the United Kingdom Wednesday paid a one-day visit to the capital of the Blue Nile state Ed Damazin where they discussed humanitarian situation with the state authorities, aid groups and displaced persons.

“The European diplomats are firmly convinced that peace talks should resume immediately, to create an environment that would allow the continuation of development assistance and the delivery of humanitarian aid,” said the head of the EU mission in Sudan in a statement released after their return form Ed Damazin.

Ambassador Tomas Ulicny further said that “The role of women in peace processes was emphasised. Humanitarian access is a priority and many children are in urgent need of vaccination. Assistance should never be denied, especially when there are urgent needs.”

Sudanese government and Sudan People’s Liberation Movement-North (SPLM-N) will resume talks in Addis Ababa on 2 November. The two parties will discuss the adoption of a declaration of principles including a cessation of hostilities agreement.

Also, a humanitarian agreement should be discussed to enable aid groups to reach civilians residing in the rebel held areas in Blue Nile and South Kordofan.

Ulicny underscored the need to respect the respect international humanitarian law and called on Khartoum and the SPLM-N to “lift the suffering of the innocent civilians. Everything should be done to avoid civilian displacement”.

The European diplomats also called on the Sudanese government to authorise them and the international relief groups to assess the humanitarian needs in the different affected areas saying the “visit showed that there is an urgent need for more development and humanitarian assistance to the Blue Nile’.

UN agencies supported by the African Union and the Arab League in the past years proposed tripartite plan to reach the affected civilians in the rebel controlled areas. However, the mistrust between the warring parties and the continuation of war prevented its implementation. (ST)