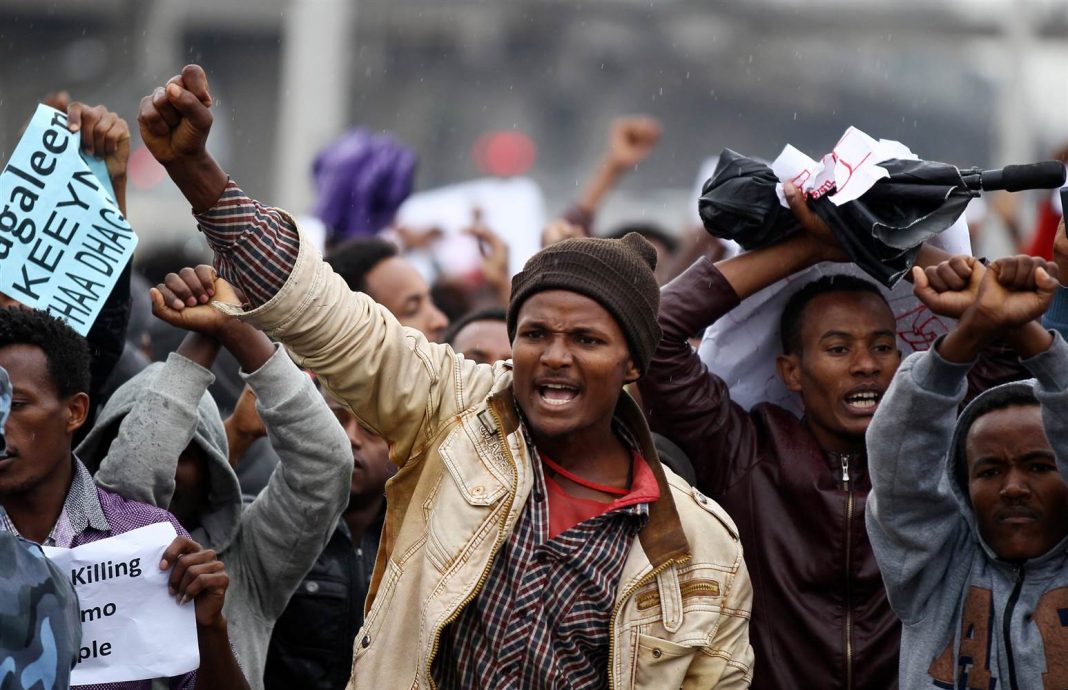 by: Alem Mamo. “We have to defend ourselves from tyranny. No one is going to hand us our freedom, we have to earn it.” As the world ushers in the new year, Ethiopia’s political, economic and security situation is entering a new and dangerous phase. The peaceful and popular uprising that swept the country in 2016 is gradually transforming itself into a well-organized armed resistance in various parts of the country. The government belligerence and refusal to respond to the popular demand of citizens and engage in a genuine, inclusive and meaningful dialogue with opposition political forces and find a workable solution to the political stalemate is forcing many groups, concerned citizens and peaceful activists to re-evaluate their non-violence strategy.

The year 2016 was one of the most tumultuous and troublesome years in the country’s recent history. After 26 years of a single party authoritarian rule, millions voiced their disdain and disapproval of the regime and demonstrated peacefully in towns, villages and cities. However, the response from forces loyal to the regime was brutal and inhumane. They killed thousands of civilians in a broad daylight and arrested tens of thousands of innocent citizens across the country. The declaration of a six-month state of emergency by the regime is clear evidence that the confrontation between the regime and the people of Ethiopia has reached its climax. This attempt by the regime has, in fact, backfired and pushed some considerable segments of the society to abandon peaceful resistance and organize themselves into armed groups and confront forces loyal to the regime.

In the northern part of the country the rapid development of armed groups challenging forces loyal to the regime has increased drastically. Furthermore, the regime’s attempt to fend off these well-organized and committed forces is proving to be futile, as these small but highly organized forces garner strong support from the communities they operate within. In the eastern and western parts of the country there are number of armed groups emerging and posing a major challenge to the regime. The geographic landscape of these parts of the country naturally tends to favor a guerrilla warfare, and these small groups are rapidly gaining momentum as they present formidable challenge to the regime.

A genuine and inclusive political dialogue in Ethiopia should have happened long ago. Unfortunately, the regime time and again failed to harness several unique opportunities for a dialogue and peaceful transition of power. Instead, it chose to cling to power at any cost, leading the country into a catastrophic path that threatens its national survival.

The regime blended and infused myth, story, history into ethnic identity and manipulated the political discourse by injecting hate, division and polarization into the political discourse.  For a quarter of a century such an irresponsible strategy has been used for a dangerous political game instead of unity and cooperation among various groups. This overstretched identity manipulation is a poison that the people of Ethiopia are trying to reverse and build a more united, more cooperative union through a political system that gives a way to freedom, justice and the superiority of the rule of law. The question is which path will lead to this destination. Peaceful uprising or armed resistance? The choice is the regimes’.

Most have made up their minds and concluded the regime is not willing or interested in a peaceful resolution of the political crisis. As one northern farmer put it, “We have to defend ourselves from tyranny. No one is going to hand us our freedom, we have to earn it.”

The regimes’ six-month state of emergency that was supposed to restore peace has in fact transformed the peaceful resistance into a formidable armed resistance. Like many societies robbed of their dignity and humanity by tyranny the Ethiopian people are simply standing up and fighting for what is right. In a demonstration of this spirit, fathers are picking arms to protect their children from torture and rape. Men and women are leaving their homes and choosing to fight to liberate themselves from suffering under authoritarian rule. In effect, they seem to be echoing John F. Kennedy’s words “Those who make peaceful revolution impossible will make violent revolution inevitable.”  This is the reality in today’s Ethiopia.

The inevitability of protracted and destructive conflict in Ethiopia is becoming more and more plausible with each passing day. Those who would like to wish it away or who say “it can’t happen here” should simply look around the neighborhood. Somalia, South Sudan, Sudan, Yemen, Libya, Syria are places where human tragedy unfolds before our eyes every day. These countries too once thought themselves immune from such tragedy, and sadly they were wrong.

The writer can be reached at alem6711@gmail.com