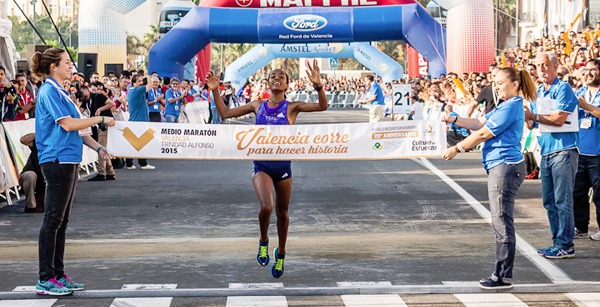 The women’s competition was just as exciting as Ethiopia’s Netsanet Gudeta smashed the course record by 31 seconds to clock a career best of 1:07 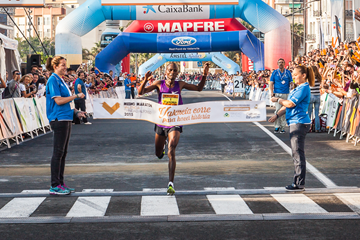 Thanks to the 22-year-old Kenyan’s time, Valencia has now accomplished a record of five straight years with sub-60-minute winning times.

Cheroben’s win is the 10th successive Kenyan victory in the men’s race and his compatriot Mathew Kisorio placed second, also finishing within 60 minutes.

The event has earned a deserved reputation for quick times thanks to its flat course and being only about 16 metres above sea level.

Held under almost ideal 15C weather conditions with no rain or wind, the race kicked off at a steady 2:48-per-kilometre pace, powered by a group of three pacemakers headed by Emmanuel Bor who went through the opening 5km in 14:02. By then, 18 men remained in the leading group.

The rhythm remained the same for the next 5km split as that point was covered in 28:06 although the main group had been whittled down to eight. Surprisingly, Kenya’s current 10km and 15km world record-holder Leonard Komon had already lost ground and any chance of victory.

Shortly afterwards, Kisorio took charge and surged on the toughest section of the circuit which proved to be unattainable for most of the rest of the large top contingent as only his countryman Cheroben could live with his terrific pace.

The 15km point was reached in 42:01 with Kisorio still making the pace and Cheroben trailing in his wake. They were still on target to better the world-leading mark of 59:14, but Kisorio’s rhythm began to slow down a bit.

Cheroben then took command and the key moment came with the clock reading 50:30 as he broke away from Kisorio with incredible ease with just 3km remaining.

The final section proved to be a solo run for Cheroben but he succeeded in his goal, retaining his title in a world-leading 59:10, just 22 seconds shy of his winning mark from last year.

While a fading Kisorio took second in 59:53, the third spot on the podium went to Eritrea’s Dawit Weldeslasie Hagos in a PB of 1:00:27.

“I already know the circuit very well and that’s an advantage for me,” said Cheroben. “Valencia’s circuit is perfect to get quick time and I’ll come back next year of course to try a hat trick of victories and become the fastest athlete in the world as it has happened the last two seasons.”

World cross-country bronze medallist Netsanet Gudeta was something of a surprising winner of the women’s race as she wasn’t the fastest in the field, but the 24-year-old showed impressive form to knock more than a minute from her PB and lead an Ethiopian 1-2-3.

The early pace was frantic, as the top women were timed at 15:32 for the first 5km. The rhythm settled down slightly and they passed through the 10km point in 31:32; by then the group was compounded by the Ethiopian trio of Gudeta, pre-race favourite Worknesh Debele and Genet Yalew Kassahun plus Kenya’s Rose Chelimo.

Having passed 15km in 47:27, Gudeta built a significant lead during the final quarter of the race and with 5km to go it became clear that she would be the eventual victor.

The course record wasn’t the only bit of history that Gudeta made. She became the first Ethiopian athlete to win in Valencia since it moved from a 20km to a half marathon in 2006.

A record figure of 10,884 athletes finished the event which took in Valencia’s historic city centre and the port area by the Mediterranean.IAAF