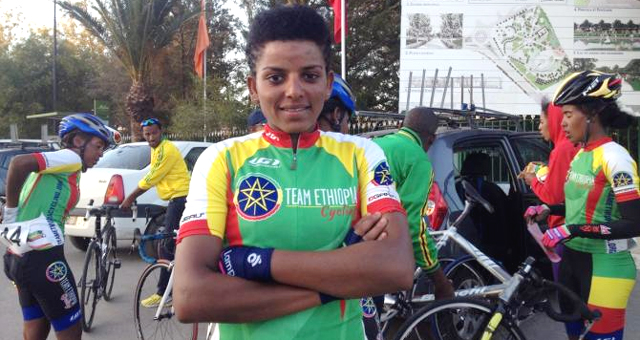 Mogadishu (HAN) February 27, 2016 – Public Diplomacy and Regional Stability Initiatives News. Girlfriend of Lampre-Merida rider Tsgabu Grmay is one of the best female cyclists in Africa.From her home in Ethiopia, Hadnet Asmelash never missed a stage of the Giro d’Italia last year. Whatever the race went through, the flat stages or the Dolomites, she tried to see her boyfriend, Tsgabu Grmay of Lampre-Merida, the first black African to compete in the Corsa Rosa in over one century. But Hadnet, 22, is not a pro rider’s partner like the others. She is a cycling champion in her own right, and she dreams of becoming a professional in Europe, following the path of Grmay.

The two Ethiopians don’t see each other much, as he lives in Lucca, Italy, and she still in Ethiopia. They enjoyed being reunited this week in Casablanca, Morocco, where they both raced the African Continental Championships. On Friday, Hadnet finished ninth in the road race, ten seconds behind the winner, Vera Adrian of Namibia. For his part, Grmay will be one of the favourites for the men’s race on Saturday, which takes place over a distance of 180 kilometres.

“My dream is to race in Europe and I am fighting to make it true,” Asmelash told Cyclingnews after a later dinner near the Corniche, in Casablanca. “Sometimes I have been doubting because I don’t see any concrete offer coming.”

“I have to admit, it is very difficult for a woman to be a cyclist in Ethiopia,” Grmay confides. “It is hard for men too but even harder for women because they don’t have opportunities to be real professionals.”