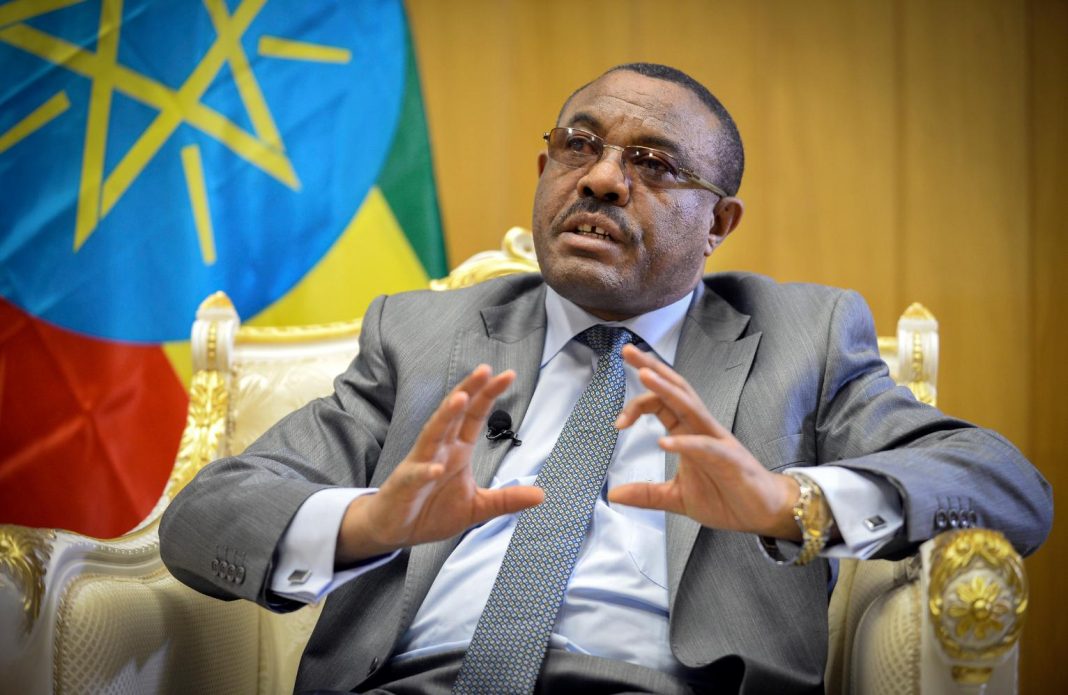 ADDIS ABABA, Ethiopia – Former Prime Minister Hailemariam Desalegn warned the international community against putting pressure on Ethiopia’s government to end the war in the northern part of the country too soon before defeating and bringing to justice Tigrayan leaders who admitted instigating the 21-day-old conflict and who pose a “threat to the peace and security of the broader region.”

Hailemariam’s support for Addis Ababa’s military operation and his rejection of international mediation efforts will most likely boost Prime Minister Abiy Ahmed’s position of no-negotiation with a “criminal clique” at a time when his government is engaged in a messaging war with pro-Tigrayan groups over who’s right and who deserves sympathy and support. with the UN Security Council expected to hold discussions on the issue.

The war in the Tigrayan region has brought forth two divergent international camps: One calling for an immediate cessation of hostilities and another urging a decisive victory over the Tigray People’s Liberation Front, which runs the northern region and doesn’t recognize Prime Minister Abiy’s government, which it considers an illegal entity.

The Ethiopian government and its allies have continuously highlighted the abuses- and corruption-laden era of Tigrayan-led administrations and the need to hold former leaders to account. Tigrayans and their sympathizers — mainly some media outlets and analysts, who deliberately downplay or even whitewash the crimes and misrule of the minority group — have dialed up their call for dialogue between Abiy and TPLF after federal forces closed in on Tigrayans’ capital, Mekelle.

“If the TPLF leadership is guaranteed the impunity it desires through an internationally brokered deal, the cause for justice and sustainable peace will be severely harmed,” Hailemariam wrote in Foreign Affairs magazine in an op-ed published Tuesday. “Above all, it creates a precedent for other groupings within the Ethiopian federation to learn the wrong lesson: that violence pays off.”

Hailemariam, who resigned in 2018 after three years of popular uprising against his government, urged the world to allow Ethiopia’s 44-year-old Nobel Peace Prize laureate to complete the war “as quickly as possible” to bring leaders of Tigray People’s Liberation Front to justice.

He said TPLF’s rocket strike against the Eritrean capital, Asmara— “carried out in a last-ditch attempt to internationalize the conflict”— had shown that the rebel group, which he referred to as “rogue actors,” “is a threat to the peace and security of the broader region.”

“Ethiopians should not be expected to embrace such a sinister and dangerous party in the guise of a so-called all-inclusive dialogue,” he said. “The TPLF leadership, as it stands, is nothing more than a criminal enterprise that should not be included in any dialogue meant to chart the future of Ethiopia.”

Since then some African and European nations have been calling for dialogue to end the war, which has so far killed hundreds of combatants, sent tens of thousands of refugees across the border into Sudan and led to large scale revenge killings, like the massacre in the town of Mai-Kadra in Tigray Region’s Western Zone in which at least 600 civilians were killed, according to the Ethiopian Human Rights Commission, which cited eyewitnesses and other local sources who say “the number is likely to be higher.”

The group said in preliminary findings released Tuesday that an informal Tigrayan youth group called “Samri”, local police and militia carried out the massacre that began with the execution of a former soldier, Abiy Tsegaye, who was an ethnic Amhara, in front of his family and whose body was thrown into fire.

The rights group, led by a respected human rights defender who previously worked with Amnesty and Human Rights Watch, said the killers targeted men from Amharas and Wolkaits tribes.

“They killed hundreds of people, beating them with batons/sticks, stabbing them with knives, machetes and hatchets and strangling them with ropes,” said the group. “They also looted and destroyed properties.”

The TPLF police and militia, who were strategically posted at street junctions, “aided and directly participated in the carnage by shooting at those who attempted to escape,” said the group.

Abiy has vowed to press on with the offensive dubbed “law enforcement operation” until what he called “treasonous TPLF clique” was brought to justice. Federal forces have been surrounding the Tigrayan regional capital, Mekelle, and Prime Minister Abiy gave local forces 72 hours to surrender before troops moved in.

“As well-meaning as many of the voices calling for negotiations are, they also seem to ignore the Machiavellian and deadly machinations of the remnants of the old TPLF regime and are shying away from blaming them for destabilizing the country,” said Hailemariam, the former prime minister.

He said talking with TPLF leaders could open a “Pandora’s box that other ethnic-based groupings are ready to emulate.”

“Those calling for talks should understand that the very prospect of negotiating with the TPLF’s current leadership is an error—as a matter of both principle and prudence,” he said.

He said the TPLF leadership, after losing power to Prime Minister Abiy, “designed and is now executing a strategy meant to capitalize on the propensity of the international community to fall into its default mode of bothsidesism and calls for a negotiated settlement.”

“The TPLF’s leaders are savvy operators who know how susceptible the international community is to such manipulation,” he said.

TPLF leaders, he said, premised their strategy on three assumptions: The International community’s propensity for “superficial dialogues,” their fighters’ invincibility and their ability to “easily prevail in an armed confrontation with the federal government.”

“The TPLF leadership’s illusions about its invincibility and military prowess are now being dispelled rather quickly,” Hailemariam said, adding that TPLF’s attack on Ethiopia’s Tigrayan-based Northern Command has “strengthened the resolve of the federal government and many Ethiopians to bring criminal elements within the TPLF to justice”

To secure immunity for their past and present misdeeds and get a power-sharing deal, the TPLF leadership, he said, triggered an armed conflict with the federal government so as the international community intervenes to mediate between two sides that are not morally equivalent.

Hailemariam, who confessed being a part of the ruling party whose “economic and political mismanagement” prompted Ethiopians to rise up, said “benign calls” for an immediate cessation of hostilities in the Tigrayan region “often don’t work,” even if they seem “at face value noble and well-meaning.”

“Such an agreement would enable the TPLF leadership to exercise influence that exceeds the limited support it enjoys in a country with a population of 110 million,” he said.

He warned the international community against ignoring “complex political and moral realities” in Ethiopia and calling for “superficial dialogues that will invariably end up in power-sharing agreements in which rogue actors are rewarded for instigating violence.”

He gave South Sudan, where a power-sharing agreement between its president and vice president fell apart twice, as the “archetypal example” of how adopting “an attitude of false balance and bothsidesism” and neglecting “the true nature of conflicts and the forces igniting and driving them” can lead to the crumble of brokered peace deals “as soon as they have been signed.”

Disagreements between President Salva Kiir and opposition leader Riek Machar plunged the oil-rich nation of about 12 million people into a five-year civil war that killed nearly 400,000 people. The two leaders agreed last February to form a coalition government in which Machar was for the third time appointed as vice president.

Hailemariam laid into analysts and “so-called experts” who described TPLF’s militia as “an invincible force that could withstand or even defeat the Ethiopian National Defense Force, as if other Ethiopians are inferior to its members.”

“This borderline-mythical sense that the TPLF leadership is invincible only reinforces its brinkmanship and deadly provocations,” he said, noting that “all Ethiopians are battle-hardened, not just those in the TPLF.”

The Ethiopian government on Tuesday urged media houses and international organizations to “thoroughly” investigate and verify information they get from Ethiopian refugees in Sudan.

“We have received credible intelligence that TPLF operatives have infiltrated refugees fleeing into Sudan to carry out missions of disinformation,” said Ethiopia State of Emergency Fact Check, a government-run Twitter account.

Hailemariam urged Addis Ababa to investigate allegations of ethnic profiling of Tigrayans and avoid any civilian casualties and protect all civilians affected by the current conflict.

“Ethiopia should be a place where the constitution and the rule of law prevail so democratization can progress rather than letting our beloved country slide into chaos,” said the former prime minister.