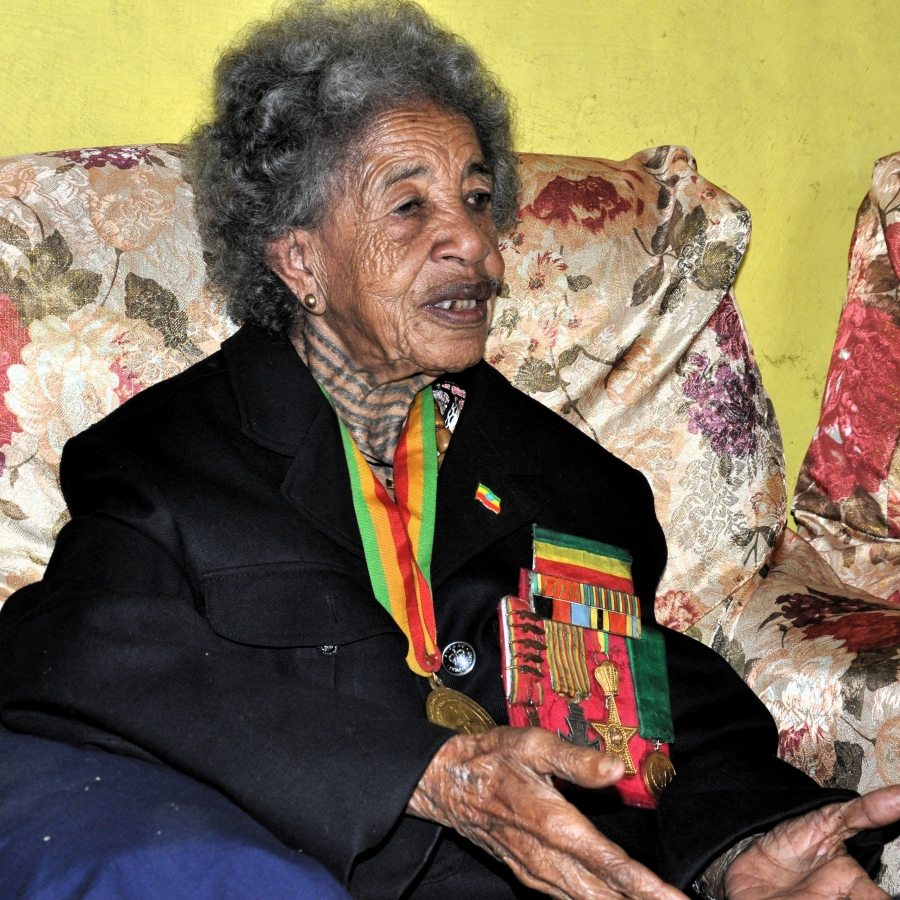 ADDIS ABABA (HAN) May 10.2016. Public Diplomacy & Regional Security News. Patriot Bitewush Mitku was born in 1918 in Hanamariam, Awabel Woreda of the former Gojjam province. She was one of the gallant Ethiopian women who participated in the war against fascist Italy. In relation to the 75th anniversary of Ethiopian Patriots’ Day, the Amharic daily Addis Zemen had an exclusive interview with Patriot Bitewush Mitku. The interview is translated by Haftu Gebrezgabiher and presented as follows,

What do you recall about the war?

Troops of the invading fascist Italy entered into Ethiopia by air and land. When the fascist forces invasion announced throughout the country, the enemy force was crossing Abay River through Dejen to Debre Markos. Residents of these parts were cordially awaiting standing outside of their home to go to war against the invaders under the leadership of Belay Zeleke. My husband was in that battle field. It was said by that time that the enemy was crossing Debre Markos towards Bechena. Later on, the enemy forces started to drop bombs. This time, the communities as a whole were under terror. We hide ourselves in the jungles and bushes, hills and rivers around Abay River and Bokebna wild regions. We left home to save our life. Then, the troops burnt down our home and properties. I was pregnant by that time. Five of our neighbours and I, all women, remain in the holes and caves. Being the act of nature, I gave birth to my only son Dagnachew Temesgen in Bokebna. Many other had also gave birth there. Most of the infants were dead soon after to lack of food.

What was the contribution of women during the war?

Those who were physically strong had been directly participating in the war, others were also contributing a lot by providing food, armaments and water. We were cleaning the armaments using oily materials. Giving high moral and national spirit to our troops by singing war songs and slogans. Medical services using traditional methods and clothes to stop bleeding of the wounded troops in our side. Arming ourselves with weapons seized from surrendered or dead fascist soldiers, we were responsible to guard. All these activities were down on the shoulder of women. We heard of our enemies saying it would be heavy if the women involved. We used to inspire our male patriots never to give up the fight until our national flag is hoisted in its rightful place with pride.

How was the army’s preparation by that time?

At that time we did not armed ourselves with modern weapons or supplies when we went to war. The supply of water and food is very rare. We hunted or gathered fruits in the jungle. Besides, our enemy’s bullet many people were died as the result of the high suffering.

What is the unforgettable memory you have during the war?

While we were retreating in the rivers and caves, many of us were pregnant and gave birth in that place. This was what happened by the year 1937. It was a time we had unwavering fighting which was waged against the fascist while we gave birth. My only son was born that time.

What are the things this generation should learn from you?

During the five years of Italian invasion, Ethiopian patriots took the strong nationalistic spirit handed down from Emperor Minellik II and Emperor Tewodros to win the war. The previous battles of Maichew and Adwa contributed a lot in the five years of patriotic struggle. The past patriots have handed over this country with pride and sovereignty. They face enemy’s for the good of the country. Therefore, this generation should invest its capital, money and knowledge to build a strong love of nation. This generation should work day and night to extricate the nation out of poverty. This is only possible with active involvement of the youth. Our history should transfer to posterity. The then fascists are gone. We are friends with Italy now. They want our development and prosperity. It is commendable to work together with them. Thank you for your time